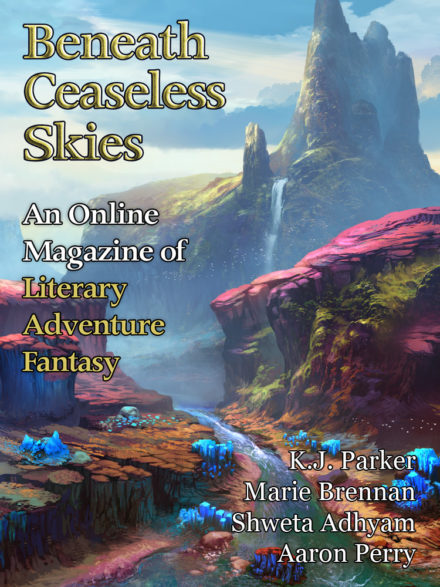 In those days men lived for centuries, if they were not killed. I could die as many times as necessary. However long it took, Bhishma would still be there.

For a long time I thought “La Molejera” would forever hold the record of Most Egregious Research-to-Product Ratio. I read a 480-page ethnography for that story, which is 8500 words long.

Then I got the idea for this story.

It’s also a contender for the Longest Time From Idea to Story prize, since I came up with it in October of 2009, when my husband and I were on a trip to India. I’d brought with me William Buck’s abridged retelling of the Mahabharata, one of the two great Indian epics (the other being the Ramayana) . . . and a side character in it caught my imagination.

But it took me until early 2019 to figure out how to approach that character as a story. In the interim, I read other versions of the Mahabharata; my research is linked in the sidebar to the right. All in all, it totals something like two thousand pages of reading for a 3400-word story. Given the scope of the epic, though, it was honestly necessary for me to understand the cultural and narrative space through which that character moves.

“Sankalpa” was published in issue #287 of Beneath Ceaseless Skies, in September 2019.

It’s a wonderfully written piece, out of order but still completely coherent, and with a momentum that builds through the events and their organization […] a great read!

From character names to chapter headings, each meticulously thought-out detail fits precisely into Hindu mythology, illuminating Brennan’s alternate ending as if it had always been there.