Much of this month’s reading was All Japan, All the Time, as I got started on the draft of The Market of 100 Fortunes (my third Legend of the Five Rings novel). Some of that was direct research; some was just me getting my head back into the correct cultural gear; some was me figuring, well, I’ve got a bunch of Japan-related books that have been piling up on my lists, so why not use this as an impetus to read some of them.

END_OF_DOCUMENT_TOKEN_TO_BE_REPLACED

We’re in the final month of Year Six (!) of the New Worlds Patreon, and for our last topic, my patrons have voted for some essays about the interactions between humans and animals/the natural environment more generally. We begin with invasive species — comment over there!

Sometimes the organization of the New Worlds Patreon doesn’t work out as tidily as I might like. Since I’ve said my bit on violent crimes (sexual assault having been covered previously), instead we’re wrapping up the month with something that more belongs back with the theft essays from the start of this Patreon year: smuggling! Comment over there.

Woke up today to an alert from my publisher that due to a COVID outbreak at the warehouse, the release date for The Game of 100 Candles has been pushed back to March 7th. My apologies to everyone, but you know how it goes!

Yoon Ha Lee has mentioned this quartet of books several times over the years, reminding me that I loved them as a kid and prompting me to re-acquire the series to see if it holds up. (The four volumes are Prince of the Godborn, Children of the Wind, The Dead Kingdom, and The Seventh Gate.) My recollection, at a distance of nearly thirty years, was that it had amazing worldbuilding and an ending that kid!me had kind of a “Jesus, Grandpa, what did you read me this thing for?” reaction to, but which I suspected was actually kind of amazing in ways I didn’t properly appreciate at the time.

Reader, I did not misremember.

Plot summary first: the declining empire of Galkis is under threat from without and from within, and their only hope is for someone to go on a quest to free their prophecied Savior from a prison whose seven keys are in the keeping of seven sorcerers (well, five sorcerers and two sorceresses). This is 100% unabashed Plot Coupon territory, a reason for Prince Kerish-lo-Taan, his half-brother Forollkin, and the companions they pick up along the way to roam through nearly the entire map collecting inventory items until they have the full set . . . but two things significantly mitigate the cheesiness and predictability of that plot. The first is just what it means in practice for them to be obtaining those keys, and the second is how it all resolves in the end, which is not at all what you might expect (hence kid!me’s reaction).

Before I get to that, though, the worldbuilding. When I bought copies of the books, they were shockingly short; the longest is still less than 250 pages. How much setting richness, I wondered, could possibly be squeezed into such a small space?

END_OF_DOCUMENT_TOKEN_TO_BE_REPLACED

No discussion of violent crimes would be complete without murder, so this week, the New Worlds Patreon takes a swing in that direction. Comment over there . . .

Another week, another round of violent crimes at the New Worlds Patreon — in this case, assault and battery. Comment over there . . .

We interrupt my drafting of The Market of 100 Fortunes (and also my edit letter for The Waking of Angantyr just arrived (plus the copy-edits of Labyrinth’s Heart will be here Real Soon Now (welcome to my January))) to announce that my story “Constant Ivan and Clever Natalya” is up at Beneath Ceaseless Skies! If those names look familiar, it’s because they’re folkloric figures referenced in the Rook and Rose series; having referenced them, I felt inspired to turn around and actually write this story. Which means, yes, that this is me going Full Metal Folklore, in a tale of a challenge set for a year and a day, horses of the dawn and the dusk and the mountains and the sea, a trickster heroine and a good-hearted hero, and also some prophetic turtles. I hope you enjoy it!

What a way to start off 2023 . . . but my loyal New Worlds patrons voted for violent crime this month, so here we go! First up is abduction — including the variants where it wasn’t actually a kidnapping, or it was but the law is on the kidnapper’s side . . . comment over there.

Midnight Never Come is officially back in print!

By which I mean, I have put together my own U.S. print edition, after years of ebook, U.K. edition, or used copies of the original version being the only way to get your hands on a physical volume. You can currently obtain it from Amazon if you want (note that I get a commission on that link), but it’s also available from Barnes and Noble and Book Depository, and may filter out to other retailers in time.

And yes, the others will follow. In Ashes Lie is on the way next, and then later this year I’ll be reissuing A Star Shall Fall and With Fate Conspire in joint ebook and print editions. For the first time in a decade, the whole Onyx Court series will be fully available again! 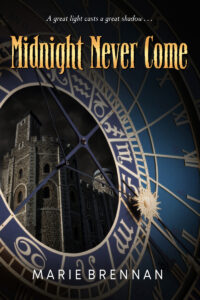