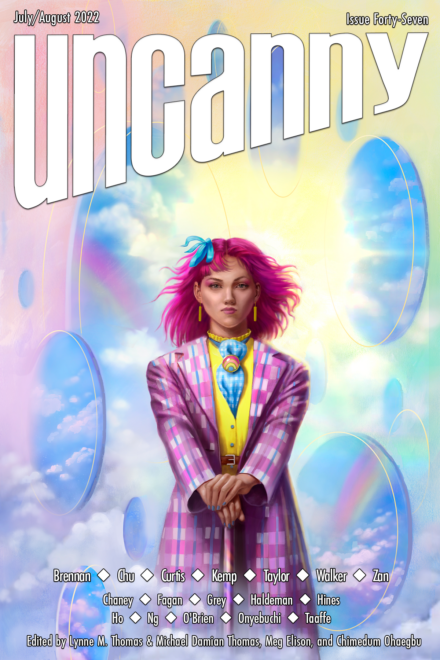 The sign for the exit said FATE in blocky white letters, with an arrow pointing the way to town. The old woman laughed and drove on.

The seed for this story came to me back in the summer of (I think) 2004, when — for reasons too long to explain here — I drove from Texas to Indiana with a life-sized papier-mache statue of Atropos. Cruising along with one of the Fates in my back seat, I passed in fairly quick succession signs for places or businesses called HOPE, FRIENDSHIP, and FOE.

Nine years later, with “Atropos on a road trip through the Midwest” having languished on my list of ideas without going anywhere, I randomly scribbled about eight hundred words while teaching SF/F to a bunch of twelve-year-old kids.

Seven and a half years after that, I discovered the fragment — which I had completely forgotten in the interim — and realized that actually, I had something there. It took some chewing, not to mention polling people on Twitter with a mythological question, to finally push this over the line into a finished story . . . but at last, over sixteen years after Atropos and I hit the road, I had a draft. (If I had a record of who suggested the obscure mythological figure that shows up toward the end, I would thank them.)

And that story has now sold to Uncanny Magazine! It is out now, in their July/August issue, including in podcast form.

A beautiful and compelling story […] Brennan is a wonderful storyteller and this story is a real showcase of her craft.

[…] mixes Greek mythology into a great little story set in a decayed American Midwest of the near-future. [Recommended story]