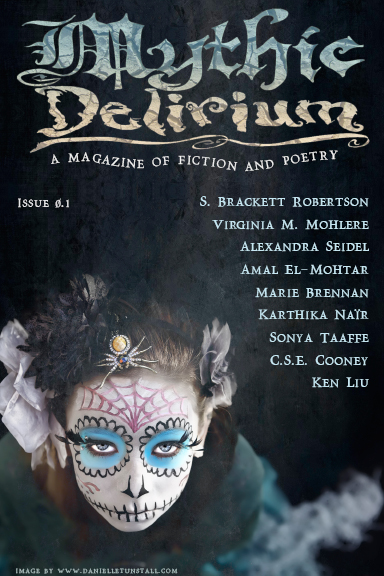 “The Wives of Paris”

They offered him a beautiful woman, power over men, victory in war.

This story was inspired by a friend’s completely unrelated Trojan War story. She was in the middle of describing it to me, and I suddenly started wondering what would have happened if Paris had given the golden apple to Hera or Athena instead.

Mind you, what I ended up writing wasn’t the idea I originally came up with. You see, this was supposed to be a poetic thing — not literal poetry, but that kind of rich, beautiful language, something evoking its mythic scope in the reader’s mind.

Instead, it turned into When Folklorists Get Snarky.

But that’s okay. I have to admit I’m amused to have written something that name-checks not only Lamia, Odysseus, and Romulus and Remus, but Hallgerðr, Morgan le Fay, and Snow White. It was published in issue 0.1 of Mythic Delirium, in July 2013.

Rich word choices and settings that blend speculative concepts with quotidian reality highlight this stellar anthology of prose and poetry from well-known editor Mike Allen (Clockwork Phoenix) and his wife and copublisher, Anita Allen. Imaginative ideas abound, include creating an alternative history for Troy’s ill-fated Paris in Marie Brennan’s “The Wives of Paris.”