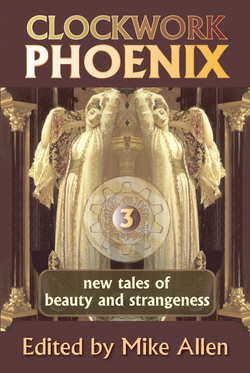 “The Gospel of Nachash”

In the beginning God made the world, and on the sixth day he made creatures in his image. Male and female he created them, and they were the bekhorim, to whom God gave dominion over every herb bearing seed, and every tree bearing fruit, to be in their care. Mankind he formed from dust, but the bekhorim were made from air, and their spirits were more subtle than that of man.

It’s a bit of an exaggeration to call this one a retelling; it’s really more of an apocryphal (and, depending on your sensitivity, rather blasphemous) fake book of the Old Testament. It also explains certain gaps in Genesis by means of a Secret Ingredient, though, and explains certain aspects of the Secret Ingredient by means of the Book of Genesis, though, which is why it goes in this category.

The initial blame belongs to Rev. Devin McLachlan, the Episcopal priest who put the idea in my head; then it passes to my husband Kyle and my friend Jessica Hammer, who between the two of them helped me work out the linkages between the Secret Ingredient and Jewish lore. Yonatan Zunger checked over the result for me. But I suppose I do bear the blame for turning the idea into an actual story.

And Mike Allen bears the blame credit for publishing it! “The Gospel of Nachash” was printed in the third volume of the Clockwork Phoenix anthology series, published in July 2010; the table of contents is linked on the right.

Music for this story was Passion, the soundtrack to The Last Temptation of Christ, by Peter Gabriel.

Allen’s third volume of extraordinary short stories reaches new heights of rarity and wonder. Marie Brennan sets the bar high with “The Gospel of Nachash,” a fine reinterpretation of the Adam and Eve legend from a fresh perspective.

The Gospel of Nachash” opens [the anthology], Marie Brennan’s haunting tale of the beginning of time, and a very interesting reinterpretation of a gospel it is, too.

Marie Brennan’s “The Gospel of Nachash,” an alternative version of Genesis featuring a lovelorn Satan figure, gets more haunting the longer you mull it over.