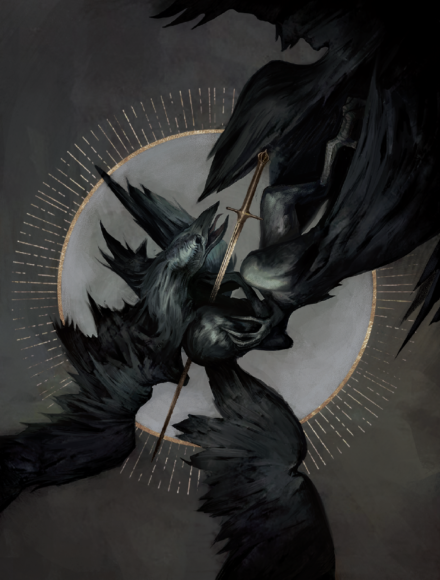 This is how a valravn is made.

The genesis of this story is rather roundabout.

It began with a tabletop role-playing game I was in, and me trying to imagine what a love interest for my PC would look like if it were the sort of game that involved romance. Later on that idea morphed into a sort of conjoined pair of twin concepts for novels — the starting material trying to go in two directions at once — and although I still (as of posting this) haven’t figured out how to surgically separate the two or whether one of them should just cannibalize the other, one night as I was heading to bed, a COMPLETELY DIFFERENT approach to the love interest character mugged me and made me write it.

The result has absolutely nothing to do with its origin — but I am delighted to say that it’s my first sale to Strange Horizons! It was published in the September 16th issue, in 2019, and you can read it for free online, or listen to the audio version. The artwork on the left is by Qistina Khalidah.

Hauntingly beautiful, and never loses hope or compassion, even in the face of cruelty and pain.

More of a prose poem than a traditionally narrated work of fiction, this brief tale is very well written and is full of striking images.

A dark and beautiful fantasy about repentance and mercy and transformation, and I can’t recommend it highly enough.

. . . very intense, with a lovely rhythm to the language.