In faraway lands, the tale is a romantic one. She sleeps in her tower, in the castle surrounded by thorns, awaiting a prince who is brave and true of heart, for only the kiss of such a man will end her slumber and bring her back to life. She has waited for many centuries, they say, and many princes have gone, fighting their way through the dark wood and climbing the thousand stairs to the tower room, but none have been pure and noble enough to wake her.

Some tellers say that, distraught by their failure and this judgment of their character, the princes fling themselves from the tower window and fall to their deaths below.

If that were true, the courtyard of the sleeping castle would be littered with bones.

I really can’t say what makes me think of these twisted versions of fairy tales; I’m sure someone armed with literary criticism could have a field day with them. (My English grad student friends are specifically excluded from this. It’s no fair analyzing your own friends.)

As with all the stories collected in Monstrous Beauty, the music I used as a soundtrack is “Libera Me,” from Interview with the Vampire. Really, it’s quite a creepy song, in an understated and elegant way.

“Kiss of Life” was published in Shroud‘s anthology Beneath the Surface, edited by Tim Deal. The table of contents is linked on the right! 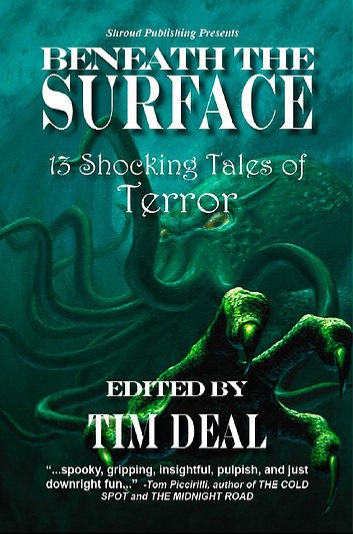 Beneath the Surface cover