Posts Tagged ‘a star shall fall’

A few days ago the Tome and Tankard blog posted their recipe for the “Lady Trent,” a mojito-like cocktail inspired by the Memoirs of Lady Trent. Our first attempt at making it here at Swan Tower was not entirely successful; it turns out we need to be a lot more conscientious about mixing the honey into the gin before adding other things, lest we wind up with a glob of honey stuck all over with mint leaves. 🙂 But the general shape of the cocktail is a great deal like the “Jimi Hendrix” I asked the internet to help me recreate a while back, so even in less-than-entirely-successful form, I give this one an official thumbs-up.

And for those of you who cannot or do not wish to partake of the booze, I thought I could post the recipe a reader designed years ago for the launch party of A Star Shall Fall. It’s called the Winged Serpent Philter, and it’s made as follows:

In a small bowl, mix two parts water and one part honey. Coat the blueberries (three or four per drink to be served) in the honey water mixture and immediately roll in granulated sugar. Allow to dry. Dip the rim of a martini glass in the honey water mixture and then into granulated sugar to coat the rim. Mix three parts blueberry juice to one part sparking water with a dash of lime juice (all liquids should be chilled). For a sweeter flavor, omit lime juice. Pour into the martini glass. Put three or four sugar coated blueberries on a garnish pick and hang on the rim of the glass. Add a curl of lime peel. Serve promptly. 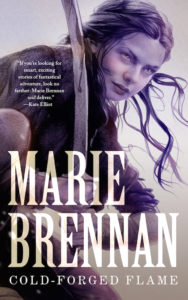 PLEASE NOTE: this is a novella. Which is shorter than a novel. I already anticipate there will be reviews to the effect of “I thought I was getting a whole book but I wasn’t” — novellas are making a comeback, but they’re not yet so widespread that the occasional reader won’t be blindsided by the shorter length.

But if you want a whole novel’s worth of stuff, I got you covered there, too! 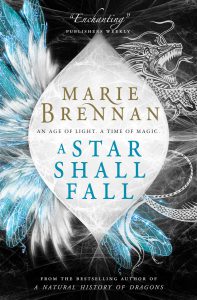 That’s right — at long last, A Star Shall Fall is out in the UK! Unlike the previous two Onyx Court books, this one has never been published in that country before. Only one more to go, and you can collect a full matched set . . .

(And if you think this is a big day, wait until April 25th of next year, when you’ll get Within the Sanctuary of Wings [Memoirs of Lady Trent #5] and Lightning in the Blood [Varekai #2] on the same day!)

Brennan explores the power of memory, self-realization, and destiny in this mix of survival story and self-discovery tale. […] Brennan delights readers with this exciting, fast-paced start to a fantasy novella series.

Cold-Forged Flame will be out on September 13th. (As will the UK edition of A Star Shall Fall, as it happens.) I can’t wait!

Jim Hines has been doing a thing on his blog where he genderswaps character descriptions to look at how women and men get depicted. He did it first with classic SF/F novels, then with more recent titles — including his own.

It’s an interesting enough exercise that I decided to go through my own books and see what happens when I genderswap the descriptions. Results are below. I skipped over the Doppelganger books because quite frankly, describing people has never been a thing I do a lot of, and back then I did basically none of it, so this starts with Midnight Never Come.

END_OF_DOCUMENT_TOKEN_TO_BE_REPLACED

Possibly the easiest way for me to encapsulate the character I talked about in a previous post is by linking you to this song.

It’s an amazing remix all on its own. I love the way it builds, wave-like: it keeps climbing and then receding, stepping back to a quieter level when you expect it to bust out in full Linkin Park screamo yelling. 😛 But more than that, it fit beautifully with Ree at the pivotal moment of her story, the brink of her metamorphosis from the broken, lost thing she had been for eons back to her original self. “I’ve felt this way before” . . . she’d been shattered, and had tried to piece herself back together — thought she had succeeded — but then during the course of the game she was shattered again, falling back to square one, so far from her goal it was almost impossible for her to believe that she was actually closer to it than ever. “Against my will I stand beside my own reflection” . . . she sold half her soul to someone else, not realizing that was what she was doing, and she had to reclaim it. “Without a sense of confidence, I’m convinced that there’s just too much pressure to take” . . . the problem with her Seelie side was that it had too much confidence, without the fatalism of her Unseelie half to temper it, which is how she got broken again, and then the symbolism of the diamond and pressure over time pretty much guaranteed I had to use this song. This was Ree at her lowest point, one step away from victory, and the tension that builds throughout this evokes those days perfectly in my mind. There’s more to it than one song, but I can point to the song and say, this. This is why I can’t forget her story.

When I make soundtracks for characters, or for games I run, or for novels, many of the songs are filler. They go in because I want the whole story in music, and so I pick the best matches I can; in the really good soundtracks, even the filler is pretty solid. But this? This is why I go to the effort. For the one or two or five songs that are the story, the ones that become so linked with the narrative that they end up feeding back into it, and it can be eight years later and hearing them still brings the story to life in my head. This is Galen walking into the chamber below the Monument. This is Dead Rick getting his memories back. Here’s the entire second half of Doppelganger, according to my half-dozing brain when I was in the middle of writing the book; I can quite literally map segments of the novel to the various stages in the music, because my subconscious had decided this was the outline it was writing to. (Much like what happened here, though that was on a smaller scale.)

It’s no accident that I also love film scores. Pairing music with story — turning music into story — is one of my favorite things. Since I’m not a composer, I have to settle for the mix-tape approach. Sometimes it works out very, very well.

Just as a reminder, the “Con or Bust” auctions close this Sunday. Bidding on the double-signed copy of A Natural History of Dragons (autographed by both me and Todd Lockwood, with a bonus sketch from him) is up to $48, while A Star Shall Fall is at $15 and With Fate Conspire is at $20. Proceeds go to a good cause, and the books don’t suck either, if I do say so myself. 😉

This entry was also posted at http://swan-tower.dreamwidth.org/577160.html. Comment here or there.

A Star Shall Fall is out today in mass-market paperback. Apart from being, y’know, smaller, with a slightly different cover, it should also have various errata corrected (like the bad arithmetic when Irrith goes to get bread). I say “should” because I don’t yet have my hands on a copy to check, but I did have the opportunity to send in corrections, and I think I caught all the places where they were needed. Famous last words . . . .

BTW, since the past couple of days have been crazy, I haven’t yet chosen an icon. I’m extending the deadline until tonight, just in case somebody else wants to hop in.

I’ve been very absent from here lately due to busy-ness and illness; KublaCon was last weekend, and kniedzw and I ran our one-shot LARP, which went very well I think, but now I have Con Crud and that isn’t much fun. Especially since I have work I need to do.

But! I am breaking radio silence to say that I’ve gotten the page proofs for the mass-market edition of A Star Shall Fall. This is my chance to correct any errors that made it through me, my editor, me again, my copy-editor, me again, my proofreader, and me yet again in the trade paperback edition — and believe me, there are some. I know of two instances of a duplicated word (“an an” in both cases), and one place where the line “Galen’s mouth gone dry” is missing the word “had,” and the arithmetic error on page 171. If you’ve spotted any others, please let me know!

1) I should have written Irrith’s letter after Delphia’s. She’s a terrible influence on my attempts at nice handwriting. 🙂

2) Re-reading bits of the books to get myself back in the heads of the characters . . . and you know what? I still like them. Quite a lot.

3) Certain songs from the book soundtracks still get me right in the gut. (Particularly “The Monument,” from A Star Shall Fall. But others, too.)

4) I really, really need to write that short story about Edward Thorne. Though I should decide which I want more: for it to be from his point of view, or for it to be the Sir Peregrin and Dame Segraine Buddy-Cop Extravaganza. (The two are, alas, mutually exclusive.)

5) Ditto “This Living Hand,” aka the Story About the Willow Tree What Killed All the Romantic Poets.

6) Although I do love my new series, and my new protagonist . . . I miss the Onyx Court.