As the renowned granddaughter of Isabella Camherst (Lady Trent, of the riveting and daring Draconic adventure memoirs) Audrey Camherst has always known she, too, would want to make her scholarly mark upon a chosen field of study.

When Lord Gleinleigh recruits Audrey to decipher a series of ancient tablets holding the secrets of the ancient Draconean civilization, she has no idea that her research will plunge her into an intricate conspiracy, one meant to incite rebellion and invoke war. Alongside dearest childhood friend and fellow archeologist Kudshayn, she must find proof of the conspiracy before it’s too late.

TURNING DARKNESS INTO LIGHT is a delightful fantasy of manners, the heir to the award-winning Natural History of Dragons series, a perfect stepping stone into an alternate Victorian-esque fantasy landscape.

This is a stand-alone sequel to the Memoirs of Lady Trent, concerning Lady Trent’s granddaughter Audrey, and a mystery involving international politics, black market antiquities smuggling, and the translation of a lost epic from the ancient Draconean civilization. It was published in North America and the UK on August 20th, 2019.

This book will soon be published in German, Russian, and Arabic!

Brennan brings a distinctive voice to each of her characters and their diaries or letters, and builds tension in her gradual revelation both of the translated text and drip-drop of implication about the conspiracy with a masterful touch. This is a compelling and readable novel, and damn did I enjoy the hell out of it.

Although Darkness is a sequel to Brennan’s beloved pentalogy, it works beautifully as a standalone novel for newcomers to her elaborate, dragon-centric world.

A welcome return to a world we thought we’d left behind. 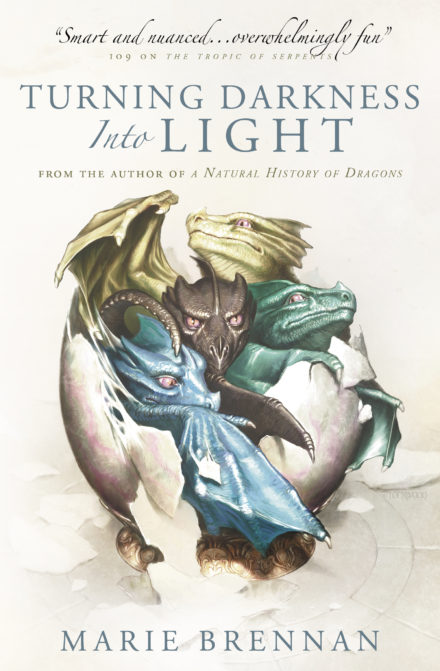