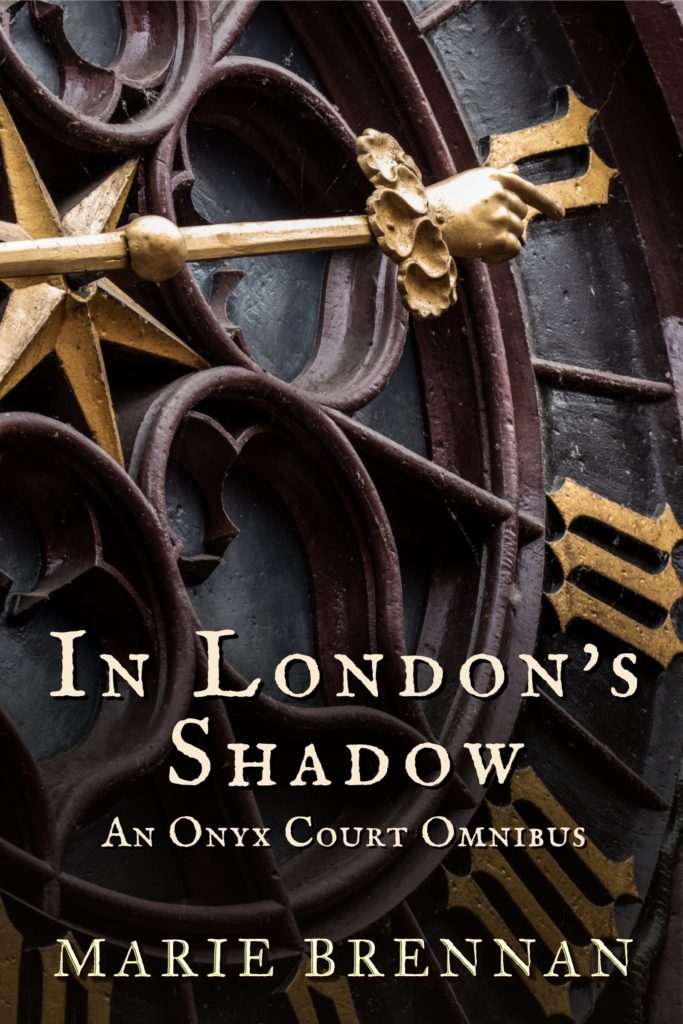 For centuries a faerie court has lain hidden beneath London: a place of shadows and intrigue, where the city’s immortal inhabitants can watch and manipulate the mortals above. Through two royal dynasties, through rebellions and plots, through war and plague and fire, the Onyx Court endures.

Now the court’s first two centuries are collected in a single book. This omnibus contains the novels Midnight Never Come and In Ashes Lie, as well as the novella Deeds of Men, the novelette “And Blow Them at the Moon,” and the short story “Two Pretenders.”

You can buy this from fine e-tailers all over the internet, chief among them Book View Cafe, but also Amazon US or UK, Barnes and Noble/Nook, Google Play, iTunes, Kobo, or (for the Canadians among you) Indigo.

Jim Hines has been doing a thing on his blog where he genderswaps character descriptions to look at how women and men get depicted. He did it first with classic SF/F novels, then with more recent titles — including his own.

It’s an interesting enough exercise that I decided to go through my own books and see what happens when I genderswap the descriptions. Results are below. I skipped over the Doppelganger books because quite frankly, describing people has never been a thing I do a lot of, and back then I did basically none of it, so this starts with Midnight Never Come.

END_OF_DOCUMENT_TOKEN_TO_BE_REPLACED

Many thanks to everyone who has picked up items from the Great Swan Tower Moving Day Sale! It has been a great benefit to me, cleaning out the various boxes I keep my author copies in.

In the course of packing up, I found a stash of the US trade paperbacks of Voyage of the Basilisk squirreled away in a corner. (I’d been wondering where they’d gone.) So here’s an updated list of what’s available. Same drill applies: all you have to do is email me or leave a message here calling dibs on something and giving me your mailing address; I’ll respond to let you know whether it’s still available, and we’ll arrange payment. Shipping is included for orders within the U.S. Inscriptions on request.

You have one more week to order anything that strikes your fancy!

Following on last week’s release of Midnight Never Come, this week we have In Ashes Lie out from Book View Cafe and various other retailers. So if you’re looking to complete your Onyx Court ebook collection, now you can!

. . . and that’s from me for a while. I’m leaving on a jet plane, for Imaginales and Forbidden Planet.

I’ve been holding off on a whole lot of news while I waited for the new site to go live; now that it has, you should expect a number of things in quick succession. 🙂

Since Midnight Never Come and In Ashes Lie have reverted to me in the U.S., I’m putting out ebook editions of them through Book View Cafe. If you click on those title links, you’ll find you can pre-order the ebooks at a number of sites, including Amazon, Google Play, iTunes, and Kobo; or if you would prefer to buy from Book View Cafe, Barnes and Noble, or Waterstones, those will be available soon. Midnight will be out on the 17th (that is, next Tuesday), and Ashes the week after.

I’m delighted to announce that Titan Books, publishers of the Memoirs of Lady Trent in the UK, will also be bringing the Onyx Court to its homeland!

Long-time readers may recall that the first two books of the series were published there by Orbit UK back in the day, but the mid-series publisher shift meant the latter two never saw UK shelves. Titan have picked up the entire series and, as you can see from the above, are reissuing them with splendid new covers — not to mention UK spelling and date formatting, like God and the Queen intended. 😉 My understanding is that they’ll be coming out in rapid succession, on a three-month cycle, so by early 2017 you’ll have the whole set. I don’t know about you, but I can’t wait to hold ’em in my hands!

Some of you may recall that years ago, just before In Ashes Lie came out, I released a novella called Deeds of Men, which took place before that novel and after Midnight Never Come. It was originally a promotional freebie, but after a while I took down the free version and put it on sale at Amazon, mostly as a random experiment — I knew zip about ebooks at the time. Despite that ignorance (which included things like me not bothering to give it a proper cover), it’s sold some copies over the years, though not a huge number.

Now that I’m a member of Book View Cafe, I decided to do it over again, this time the right way. It has a spiffy-looking cover, courtesy of Chris Rawlins and Leah Cutter, and some revisions (most of them minor; one correcting a narrative choice I’ve regretted ever since I released the novella), and this time it got formatted by somebody who knows what he’s doing (the inestimable Chris Dolley). That link will take you to the BVC site, where you can buy it in epub and mobi formats, good for most e-reading devices, Kindle included. It’s also up on Amazon, and should be live on the B&N and Kobo sites in the next day or so.

A special note about Kindles: if you already bought the novella from Amazon, I think, though I’m not certain, that you should be able to download the new version as an update, without having to pay for it again. I’d love to have that confirmed, so if you’re in that camp, please let me know.

For those who are wondering, the story does contain some spoilers for Midnight Never Come, though only of an aftermath-y sort — it doesn’t say what happened, just shows the characters where they are as a result. Otherwise it’s only really full of spoilers for early seventeenth-century European politics. 😛

And stay tuned for more news in the next few days, about what I’m doing next with BVC . . . .

This entry was also posted at http://swan-tower.dreamwidth.org/590583.html. Comment here or there.

The Carl Brandon Society is fundraising for the Octavia E. Butler Memorial Scholarship, which helps send writers of color to the Clarion workshops. It’s a prize drawing; you can purchase tickets for the chance to win an e-reader (one of two Nooks, one of two Kobos, or an Alex eReader). This goes through midnight Eastern on November 22nd, so you’ve got just a few days left to enter.

Also, Pat Rothfuss is again running his Worldbuilders event, raising money for Heifer International. Among the items on offer are a whole lot of signed books, including a pair of In Ashes Lie and A Star Shall Fall, signed by yours truly. There are so many prizes, though, that Pat’s still in the process of posting them all; check out that first link for a list, and for information on how to participate.

If you’ve looked at the Onyx Court charity auction, you’ve seen my note about how I may end up writing a short story from the historical prompt the winner chooses. That was, in fact, the outcome of the original auction, for the Haitian earthquake relief; in writing a summary for the winner, I thought of a way to frame it as a short story. So I wrote it, and I sent it out, and now Beneath Ceaseless Skies has bought it! The story is “Two Pretenders,” and I count it as Onyx Court continuity, though it’s a bit different in period and tone from the rest of the series. The winner got to read it a while ago, long before the rest of you, so if you want a backstage pass like that (and the pleasure of knowing you were a part of the process), head over there and put your bid in.

Along with that, the last round of book discussion is up over on , asking about urban fantasy in a historical context. Previous questions about mortal and faerie love, pov and non-linear time, and the interrelationship of the Onyx Hall with London are still open.

And y’know, yesterday I got this big honkin’ box of author copies of A Star Shall Fall, which need to go to good homes. So I’m thinking I might select a random commenter from the discussion posts to receive a copy. Add your two cents’ worth on one of those four posts (or more, if you feel so inspired), and you might be the lucky winner!