Publications-wise, that is. I never really know what to say about my personal life; it’s mostly a combination of uninteresting things, and stuff I don’t especially want to make public.

This was a weird year. For the first time since (I think) 2007 — which was the year after my first two books were published — I didn’t have a novel out. But since I had three in 2021 (The Mask of Mirrors, The Night Parade of 100 Demons, and The Liar’s Knot), and since I’ll have three again next year (The Game of 100 Candles, Labyrinth’s Heart, and The Waking of Angantyr), it’s not like I have much grounds to complain!

Meanwhile, on the short fiction front . . . this was a banner year, with no fewer than ten short stories published (beating out 2019, which had nine, but that was counting my fiction for Legend of the Five Rings, too). Speaking of L5R, this year also saw the publication of my first really significant game work: I’ve written micro-settings for Tiny d6, little branching adventures in 50-word chunks for Sea of Legends, RPG fluff and a few bits of mechanics for an earlier edition of L5R, but now I can lay claim to a full-bore adventure. And I’m really proud of how Imperfect Land turned out, in terms of its structure, its content, and the impact players can have on the larger world of their campaign. If any of you out there are reading for game awards and would like a review copy, just let me know!

And speaking of award nominations, if that’s your reason for looking at posts of this type, the piece I’d most like to bring to your attention is “Fate, Hope, Friendship, Foe” (3800 words, Uncanny Magazine; also available in their podcast). This is my “Atropos on a road trip through the Midwest” story, aka “the story it took me sixteen and a half years to write,” and I couldn’t be more delighted with how it turned out . . . even if for a long time there, I assumed it would never get written.

But as mentioned above, I have many other stories racked up from this year! Not all are available to read online, but:

* “Chrysalis” (5700 words, Beneath Ceaseless Skies) — a setting based on Mesoamerican folklore, where the main character is arguably a rock.

* “This Living Hand” (2900 words; Sunday Morning Transport but paywalled to subscribers) — dead Romantic poets and a willow tree that is up to no good.

* “Never to Behold Again” (440 words, Daily Science Fiction) — flash set in a world where beauty is eroded by people perceiving it.

* “The Me of Perfect Sight” (670 words, NewMyths) — Sumerian mythology about Inanna’s theft of the holy me.

* “And Ask No Leave of Thee” (7500 words, Neither Beginnings Nor Endings) — a modern retelling of “Tam Lin” that started with me figuring out how to do a non-magical version of the transformation sequence, then wound up as fantasy anyway.

* “Then Bide You There” (490 words, Dream of Shadows) — flash fiction born of me reaaaaally hating the folksong “The Two Magicians.”

* “Two for the Path” (1200 words, Shattering the Glass Slipper) — what if Snow White’s stepmother was actually trying to save her?

* “The Faces and the Masks” (340 words, Daily Science Fiction) — a meditative bit of fantasy-religious flash in the setting of the Rook and Rose series.

* “Crafting Chimera” (6700 words, ZNB Presents but paywalled to subscribers) — a psychologist tries to help a shapeshifter with identity issues.

Whoof, that’s a lot. But you know what? I already have seven stories racked up in the sold-but-not-published queue, all of which I’ve been at least tentatively told will be out in 2023. And I have two more for which I don’t have a date, but it might be in 2023. So with a few more sales — provided they’re to markets that aren’t already booked out so far, new acquisitions will be going into the 2024 schedule — I could theoretically surpass this record . . .

I’m sneaking a couple more short fiction publications in before the end of the year, and the first of those is “Crafting Chimera”! It came out today in the online magazine ZNB Presents; as you’ll see if you follow that link, they’re running on Patreon, so the story is available only to ZNBP patrons. Joshua Palmatier and his company have a long track record of putting out great themed anthologies, though, so the magazine is definitely worth checking out!

As it happens, this story also comes with a funky bit of background. To learn how it made my protagonist immortal, head on over to my site . . .

Something I did not expect on a Sunday afternoon, but was delighted to receive: an email letting me know that Uncanny Magazine is buying another story from me! A piece called “Silver Necklace, Golden Ring,” which is a chilly fairytale-style piece resulting from about five different inspirations smashing into one another; you can read the full background on my site.

Signing a contract makes a thing official, right? Right! I am delighted to say I’ll have another story in Sunday Morning Transport: “At the Heart of Each Pearl Lies a Grain of Sand,” based on a tale out of the Thousand and One Nights. It will be out some time next year!

And while I’m at it, I should mention that you can read some of SMT’s stories for free — I believe the pattern is that the first story each month is publicly available, and then the remainder (one per week, on Sunday, as you might suspect), are paywalled. As my contributor status means I get a subscription, I can vouch for them publishing a fantastic range of SF/F; if you have not checked them out yet, go take a look!

I’m delighted to announce another sale to Beneath Ceaseless Skies: “Constant Ivan and Clever Natalya,” which I describe on that page as me going Full Metal Folklore with the Rook and Rose setting. 😀

If you prefer your worldbuilding essays in tangible form, you can now get New Worlds, Year Five in print from Barnes and Noble, Books-a-Million, Bookshop.org, IndieBound, and Amazon in the US or in the UK — note that the US link gives me a small commission, but I mention that for disclosure, not as a push for you to buy from Amazon.

Also also! At JordanCon last month they published their (I think) annual) anthology, this time titled Neither Beginnings Nor Endings. It contains my long story “And Ask No Leave of Thee,” which the familiar among you will have recognized as a line from the ballad “Tam Lin;” yes, after several decades, my brain finally produced a Tam Lin retelling! You can get the anthology only from Amazon, in ebook or in print (both of those commission links again).

I published an ABSURD amount this year, y’all. Six short stories, which is quite a respectable number for me these days . . . and thanks to the vagaries of publishing schedules, THREE novels in the same calendar year. That isn’t normal, yo. But yeah, 2021 saw the release of The Mask of Mirrors in January, The Night Parade of 100 Demons just two weeks later in February, and then The Liar’s Knot here at the end of the year. Ooof.

As for the short fiction:

. . . plus five reprints in various places.

2022 will not look the same, because it can’t. But here’s hoping for a good year, regardless.

I ran into some technical snags with this, but I have finally gotten Ars Historica into a print edition! You can get it through Bookshop.org (my current recommendation for supporting independent bookstores), Barnes and Noble, The Book Depository, or Amazon in the US or the UK. It joins Maps to Nowhere in the tiny but growing library of novella-sized short fiction collections on my bookshelf — my physical bookshelf, I mean — and the others will follow in due course!

One of my projects for 2021 is to start working my way through my backlist of BVC titles and get the majority* of them into print editions. That project starts now, with Maps to Nowhere! 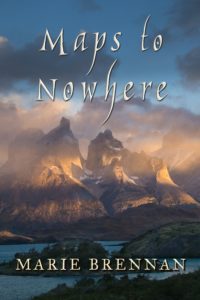 It’s a slim little paperback, about the size of a novella, and you can get it now from Barnes and Noble, Book Depository, Bookshop.org (which, btw, has become one of my favorite places to order from — it’s the latest development in supporting independent bookstores), or Amazon US or UK. (Full disclosure: I get a commission from sales through the Amazon US link. Which is nice, but did I mention I really like Bookshop.org?)

The others will follow in due course — with the asterisk up above being that some titles (Never After, Monstrous Beauty) are too short for print editions, while others In London’s Shadow, The Doppelganger Omnibus) are too long. But the rest are Goldilocks-approved, and over the next year or so, I hope to roll them all out!

* About two hours from when I post this, Alyc and I will be doing an event with Tubby and Coo’s, a New Orleans independent bookseller! We’ll be in conversation with fellow author Bryan Camp, and three attendees will get their very own Rook and Rose astrological chart from Alyc.

* Last summer I was a guest on the Aurora Award-winning Worldshapers podcast. One of the neat things about this podcast is that the guy who runs it, Edward Willett, edited an anthology featuring stories from the guests he had in his first year. Now he’s doing it again, with a Kickstarter to fund the second volume! I’m on deck to provide a story for that, and I’ve also offered some fun goodies in the rewards: signed copies of The Mask of Mirrors, ebooks of Maps to Nowhere, and even some photographic prints.

* The reason I was on Worldshapers last year was because of Driftwood, which is my segue to the next item: my publisher, Tachyon, has teamed up with Humble Bundle and the Carl Brandon Society to offer a truly massive superbundle of Tachyon titles, Driftwood included. The bundle as a whole has a value of $441, and you can get all the levels for just $28. Proceeds support the Electronic Frontier Foundation and the Carl Brandon Society, the latter of which helps support readers and writers of color in speculative fiction.

* Publication news! I crowed here when I sold a story to F&SF (after nineteen years of trying); now I can hold the proof of my success in my hands. 😀 They’re having some website problems right now that mean there’s no direct way to buy a physical copy, but ebooks can be gotten through Weightless Books, or you can subscribe here.

* And finally, one of my horror-style flash fairy tale retellings, “The Snow-White Heart,” has been reprinted in Frozen Wavelets! This and its fellow tale “Waiting for Beauty” are among my most-reprinted pieces, which is funny because I don’t generally think of myself as someone who writes horror . . .

I think that’s it for now. But my brain is like a sieve lately, so who knows. 😛