If you’d like to hear me natter on about not just writing but also role-playing games and what I think of various superhero movies and TV shows, you’re in luck! I sat down recently with Cameron Day of Comics, Clerics, and Controllers to discuss all of those things and more.

In the video we talk about worldbuilding, writing process, and a bunch of other things. I’m only sad that we stopped recording when we did, because it means you miss out on the part where we started nerding at one another about kdramas and Bollywood and Nirvana in Fire — which, okay, drifted away from the professional focus a bit, but only bit, because we both still think like writers even when being fannish about stuff. But if we’d recorded that it would have been two hours and nobody would have watched the whole thing, so.

I’ve got a post up at Tor.com about what it feels like to say goodbye to Isabella, and there’s an interview with me at Goldilox. Continuing on from yesterday’s post (and this time basically sans spoilers), there’s someone else I’d like to talk about . . .

Tom Wilker is the best accidental character I’ve had in a while. Maybe ever.

What do I mean by “accidental”? I mean that I did not, at the outset, plan for him at all. I don’t think he was even in the first thirty thousand words I wrote, before I set the book aside for a few years; I think I added him in when I came back to the story, because I realized Lord Hilford would of course have some kind of assistant or protégé along for the Vystrani expedition. Jacob was too new of an acquaintance to occupy that role; therefore I invented Mr. Thomas Wilker.

END_OF_DOCUMENT_TOKEN_TO_BE_REPLACED 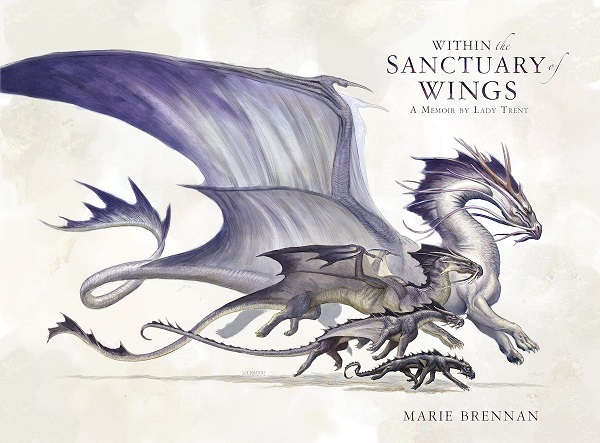 At long last, the series is complete.

This story has been living in my head for . . . about a decade, I think. I know I wrote the first third of A Natural History of Dragons in 2007 or thereabouts, before stalling out on the plot and setting it aside. I came back to it in late 2010, sold it in 2011, the first book came out in 2013, and now, my friends, the end of the story is in your hands. (Or will be, as soon as you run out and buy it.)

I’m going to be launching a new blog series, along the lines of John Scalzi’s THE BIG IDEA or Mary Robinette Kowal’s MY FAVORITE BIT, called SPARK OF LIFE: a place for authors to talk about those moments where the story seems to take on a life of its own, with a character doing something unexpected or the world unfolding a bit of depth you didn’t plan for. For me that mostly tends to happen in the depths of the tale, when I’ve built up enough momentum and detail for such things to spring forth. But in the case of this series, it happened less than a page in, because the spark of life?

Countless reviews have talked about how the narrator is one of the strongest features of the story. I’m here to tell you that, like Athena from the head of Zeus, she sprang out more or less fully-formed. The foreword got added a bit later, so it was in those opening paragraphs of Chapter One, where Isabella talks about finding a sparkling in the garden and it falling to dust in her hands, that she came to instant and vivid life. Part of the reason that initial crack stalled out in 2007 — or rather, the reason it got so far before stalling — was because I was having so much fun just following along in her wake, exploring her world and listening to her talk. The narrative voice has consistently been one of the greatest joys of writing this series. I have an upcoming article where I talk about how sad it is for me to be done with the story, because it feels like a good friend has moved away and I won’t get to see her regularly anymore. That’s how much she’s lived in my head, these past years.

Stay tuned on future Tuesdays for a glimpse at how other authors’ stories came to life. And stay tuned in upcoming days for some more behind-the-scenes stuff about my own characters!

In the meanwhile, the book is out, and so are the reviews. Here’s a spoiler-free one from BiblioSanctum, and two reviews on one page at Fantasy Literature; here is a SPOILER-TASTIC one at Tor.com. (Do NOT click unless you’ve read the book or are fine with having the big discovery of the entire series laid out in full. I’m serious.) (And while I’m at it, the same goes for that Gizmodo article that shows all the interior art for the book, because spoilers can come in visual form, too. Love ya, Gizmodo, but oof. Tor.com warned; you didn’t.)

Back in the land of no spoilers, you can read about my absolute favorite bit of Within the Sanctuary of Wings on Mary Robinette Kowal’s blog. It’s . . . a wee bit topical, these days. And I’m on the Functional Nerds podcast, talking about all kinds of things that aren’t this book, because they like to give authors a chance to branch out and natter on about roleplaying games and things like that.

And finally, I’m currently running a giveaway on Twitter. Name your favorite female scientist in any field (there, or in comments here), and get a chance to win a signed book of your choice from my stash of author copies. It’s already a stiff competition; we’ve had dozens of women named. (If you were wondering why my Twitter stream has turned into a sea of retweeted names, that’s why.) You have until tomorrow!

Fans of Dice Tales may be interested to hear that I have a post up at Tor.com today on adapting game material into fiction. (With specific reference to Cold-Forged Flame, of course.)

I’ve also been interviewed at My Life, My Books, My Escape on the novella and the process of writing it.

A whole bunch of audio links have piled up in my inbox lately, so here — have things to listen to!

I’ve raved before about how awesome a narrator I have for the Memoir audiobooks. But if you haven’t checked them out, and need to hear just how fabulous Kate Reading is, here’s an excerpt from In the Labyrinth of Drakes. It’s spoiler-free, so if you haven’t caught up with the story yet, don’t worry about hearing anything you shouldn’t.

If you’d like to hear me reading from Cold-Forged Flame, the Varekai novella coming out this September, here’s a recording from SF in SF. My reading starts around 36:30, after M. Thomas Gammarino, and then there’s a Q&A after.

While I was in San Diego for Mysterious Galaxy’s birthday bash, I recorded with the Geekitude podcast, which is posted here. My segment starts at the hour and twenty-two minute mark, and we discuss a host of things, ranging from what it’s like to wrap up the Memoirs, to hitting your thirties and not being made of rubber anymore, to RPGs and my experiences with them.

Here’s a brief video interview I did with ActuSF during Imaginales. The questions are entirely in French — my interpreter, Hélène Bury, was translating them for me, but too quietly for the camera to pick up — but I answer in English, before Hélène translates it for the camera.

I don’t have a fifth thing. Curse the internet for establishing that five things make a post! We’ll have to be satisfied with 80% of a post instead.

I’ve done a number of interviews and guest posts lately, so here’s a quick link dump:

Five Underused Mythological Creatures at Fantasy Cafe, in which I talk about weird things in bestiaries that show up all too rarely in novels.

Interview at Fantasy’s Ink; they ask me about my favorite characters and what I consider to be the most important element in a book.

Another interview, this one with Mike Underwood, who leverages the fact that we’ve known each other for more than ten years to ask me a lot of fabulous questions about gaming, Driftwood, and what martial arts master I would train with if I could.

“Time, Writing, and Tricks of the Trade”, a guest post at Bookworm Blues where I talk about the challenges of writing a sequel fifteen years after the first book.

“Kick(start)ing Myself into Scrivener”, a post at Book View Cafe on my first-ever attempt to write a novel in a program other than Wordperfect.

And finally, one that isn’t mine, but mentions me and makes for entertaining reading: Science in Fantasy Novels is More Accurate Than in Science Fiction.

Interview first: I’m over at Adventures in Sci-Fi Publishing, talking about a whole host of stuff, ranging from The Tropic of Serpents to my essay on epic story structure to making up slang to about a dozen other things. Check out the link for a giveaway, too — either a copy of The Tropic of Serpents or a set of both books.

As for the contest, this is your one-week reminder; the deadline is coming up on May 15th. If you’d like to see your own dragon concept show up in the Memoirs of Lady Trent — not to mention read Voyage of the Basilisk before it comes out! — check out the guidelines and send in your entry!

Things I’ve been saying in different places ’round the interwebz . . . .

“Seeing the Invisible” — this month’s post at SFNovelists is a review of Invisible, the ebook collection Jim Hines put together of guest posts and additional essays on the topic of representation. Proceeds from sales go to charity.

“The Gospel of Combat” — an excerpt from Writing Fight Scenes, which will be familiar to long-time readers of this blog. You can comment there for a chance to get a free copy of the ebook, though!

Interview at My Bookish Ways — in which I talk about a variety of things.

“The Dreaded Label ‘Mary Sue'” — guest post at Far Beyond Reality, talking about female characters who don’t apologize for their awesomeness.

The full schedule for my joint tour with Mary Robinette Kowal has been posted at Tor.com:

And I would like to state for the record that Mary is a genius. She made a suggestion for something I could do during the events which — well, you’ll just have to wait and see, won’t you? (Yes, this is my transparent bid to build suspense and get you all to come.) I promise I’ll talk about it after the tour, for those of you who don’t live anywhere near our stops or can’t make it to the events, but for now you’ll just have to wonder. (Hint: it involves my husband marveling, once again, at what kinds of things can be written off as business expenses for a writer.)

Also, there’s a new interview with me up at Just a World Away, in which I talk a little bit about Voyage of the Basilisk (among other things).

Within the Shreds, a rumor goes around that Last has died. But who really was Last? Lying liar, or heroic savior? A mercenary, a charlatan, a legend? A man, an immortal — perhaps even a god?