The stars winked in conspiratorial excitement as the two travelers flew by, borne on nighttime winds. Far below, the lights of London blazed with the unrelenting life of the city, broken only by the dark ribbon of the Thames. Every year London grew larger, stretching arms of concrete and wire into the green fields that encircled it, but the central areas stayed much the same, held in place by the weight of the past. And the travelers had eyes only for the familiar, disregarding with casual indifference the changes wrought by time.

Back in (I think) 2006 — maybe 2005 — a friend of mine named Crystal Black presented a paper at ICFA on the visual representation of Peter Pan, specifically with regards to his apparent age. She made some comment during the course of her talk that had nothing to do with that topic, but got my brain spinning on the ending of the story, where Peter comes back and takes Wendy’s daughter Jane to the Neverland, and then after Jane gets too old he takes Margaret.

The hindbrain, source of all truly good ideas, coughed out the phrase “The Last Wendy,” and left me to play.

I got maybe a thousand words in and stalled. Normally I start at the beginning, go on until I reach the end, and then stop, making it all up as I go. In this case, I knew where I was trying to go, but I just couldn’t see how to get there. One late-night Christmas conversation with my sister prodded at the unmoving mass of stuff in my head, and a couple of weeks later I called her up to say, “hey, I think I’m trying to make this be the wrong story. What if it was this instead?”

Her response, as I recall, was something along the lines of “That’s horrible. You have to do it.”

The result is one of my favorite stories . . . which came equipped with a little problem. See, the U.S. copyright status of Peter Pan and all his related materials is a tangled, bleeding mess. I’m pretty positive my story is in the clear, but not all magazine editors see it the same way. The solution? I mailed it to Canada. On Spec, the lovely magazine that published “Nine Sketches, in Charcoal and Blood” (one of my other favorite stories), published it in issue #81, in summer 2010. I think that’s a great home for it, and Peter Pan is firmly out of copyright in that country, so everybody wins.

But copyright or no copyright, I donated my check from this sale to the Great Ormond Street Hospital, which controls the weird quasi-perpetual-but-not-really rights to J.M. Barrie’s works. They do good work, and I didn’t write this story for the money. I wrote it because my hindbrain latched onto some problematic points in the original and would not rest until it thrashed through them in narrative form. Secondary to that was the hope that the result could find an audience. Now that I have that, I’m happy.

And more recently, I’ve reprinted it in Down a Street That Wasn’t There. Enjoy! 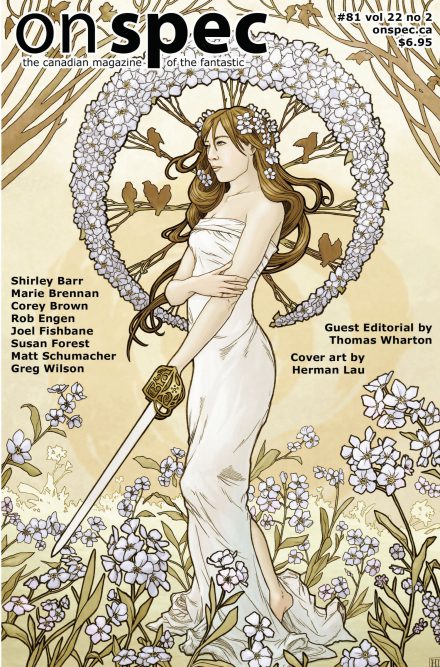