“Comparison of Efficacy Rates for Seven Antipathetics as Employed Against Lycanthropes”

Abstract — This study seeks to establish a hierarchy of efficacy for various antipathetic materials and delivery mechanisms thereof as used in the extermination of lycanthropes. Pre-existing data on this issue consists solely of folkloric narratives and unsubstantiated anecdotes on Internet communities, neither of which are based upon suitable experimental trials. It is hoped that this study will be only the beginning of a proper body of scientific literature, which might be expanded to include hyena men, were-jaguars, and other therianthropes.

This research was not authorized by a Human Subjects Committee or other ethics review board.

Shorter Title: the Fake Werewolf Paper. Inspired by the work of Patricia Briggs’ husband Michael, this is a story in the form of an academic study of silver bullets and other weapons against werewolves.

Marie Brennan’s contribution really stands out from the rest of the anthology due to the fact that it’s written in the form of a scholarly article. […] I couldn’t help but laugh at some of the humorous developments, and really enjoyed how well Brennan inserts a story into the unconventional format of a research paper. Five stars. 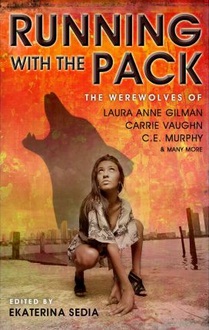 Running With the Pack cover