“Such as Dreams Are Made Of”

Holt closed his cell phone, the soft click swallowed up by the cool grey carpet, and smiled to himself. His next deal was well underway, even as he stood in the monument of his latest achievement. The room that would become his office was empty still, the furniture not yet delivered, but he wasn’t unduly impatient. Corner-cutting and well-placed bribes had finished this office tower ahead of schedule and under budget. After years of this work, Holt was a master of his art.

The idea for this story came partly from an act in the Cirque du Soleil show Quidam, the banquine acrobats. (The can also be seen in the movie Journey of a Man. They’re the grey men and white women who fling each other around without wires.) When I saw them, I thought they looked like the city come to life — as if the urban landscape had the same kinds of spirits as the natural one, just adapted to their environment. The relationship of this story to that image is dilute, but I still used the “Banquine” track from Journey of a Man as my music for the piece.

“Such as Dreams Are Made Of” appeared in issue #8 of Aberrant Dreams, and was reprinted in Down a Street That Wasn’t There.

Brennan provides a window into another world that is both alien and frighteningly real, even if it exists only in our thoughts. 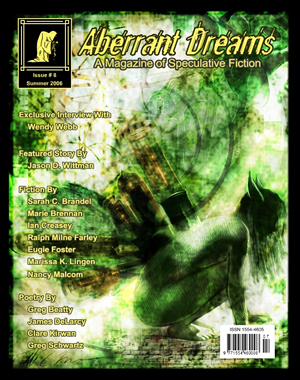