The coyotes of Mexicali were bold. They did their business in cantinas, in the middle of the afternoon; the police, well-fed with bribes, looked the other way. Day by day, week by week, people came into Mexicali, carrying backpacks and bundles and small children, and day by day, week by week, they went away again, vanishing while the back of the police was obligingly turned.

I keep wanting to call this a companion piece to “Comparison of Efficacy Rates for Seven Antipathetics as Employed Against Lycanthropes,” but the only connection between them is that they’re both in shapeshifter anthologies edited by Ekaterina Sedia. Much less silly than the Fake Werewolf Paper, this is, as you can tell, a story about illegal immigration. Special thanks go to Janni Lee Simner for helping me edit it.

It appeared in Bewere the Night, published in April 2011, and was reprinted in Down a Street That Wasn’t There. 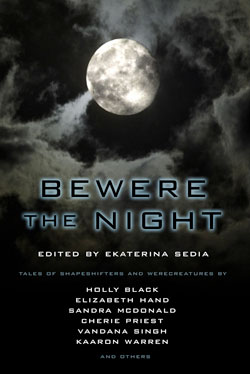