“Nine Sketches, in Charcoal and Blood”

The townhouse of Richard Lowell was not one known to respectable members of Society. He had entertained few guests during his life, and hosted no social events, so all that was known of the house and its contents came through rumour and gossip, whispering of just enough scandal as to be fascinating. Thus, when word went out that Lowell had died, and moreover had died without a will, an unprecedented opportunity arose to investigate the matter — through suitable intermediaries, of course. The public auction was set for May the fourteenth, and many a wealthy man instructed his gentleman-factor to attend, there to observe, and perhaps to purchase any oddities which might appeal.

The recent film of The Phantom of the Opera was not entirely to my taste, but there was one thing about it that very much caught my imagination: the auction scene. I loved the way the two characters kept exchanging glances, the sense that they were the only two people present who actually understood the things being sold that day, the weight of hidden story the objects carried. That unspoken subtext stayed with me, and not long after, some characters strolled onstage in my brain and started having a conversation. I pretty much had to write the story to find out what was going on — who they were, how they knew each other, and what they had come to the auction to buy.

Things I write with my hindbrain are often among my favorites, and so I’m very pleased to say that “Nine Sketches, in Charcoal and Blood” was published by On Spec in November 2007. If you would like mood music while you read it, put on the soundtrack from Interview with the Vampire; the track “Libera Me” is reserved for the stories in Monstrous Beauty, but the rest lent an appropriate air to this mannered little story. “Nine Sketches” received an Honorable Mention in the 2007 Year’s Best Fantasy and Horror.

This story was also reprinted in my collection Maps to Nowhere, and given an audio version by Serial Box.

“Nine Sketches, in Charcoal and Blood” by Marie Brennan is the kind of story that gives an expectation of good things from the moment you start reading it. In this case, when you reach the end, you breathe a sigh of relief that your expectations were never disappointed. “Nine Sketches” is about what happens when a man who was part of a mysterious group of others dies and his possessions are auctioned off. Brennan has created a tight story with perfectly rising tension that avoids crossing the line into melodrama.

This was a well written tale to curl up on a couch and read by the light of a single lamp and accompanied by a hot drink and classical music on the stereo. I would love to read more from this world that Brennan has created. The detail and the language were perfect. What happened before this story? What happened after? The characters she has created are solid, hard. You know that if you saw them in the hallway you would make room for them. They would be real and not figments of your imagination. And knowing they were real and what you have just read in her story, you would be scared silly, yet want to know more about who they are and what they are doing.

—Rachel, My Very Own Blogetary 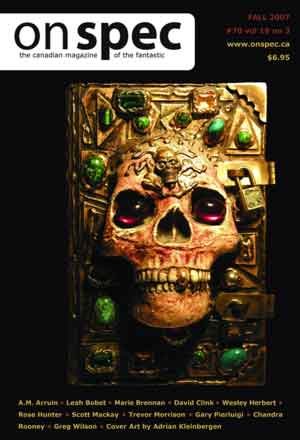