It is presumptuous of me, you must be thinking, to use such terms of affection in addressing you, for we are at best passing acquaintances, such as would nod and mouth an empty greeting were we to find ourselves at the opera together. I pray you, have patience with me, for the purpose of this letter, which I write knowing that the sickness now resident in my lungs will soon kill me, is to explain to you why it is that we know each other so poorly — and why such a thing should matter to you. In doing so, I hope I will make it clear why I have begun in so familiar a fashion.

Yeah, so, that title.

Here’s what you have to understand: the Marquis is a passionate, nay, a melodramatic individual. So when he popped up out of my subconscious, nothing would do but that he have an equally melodramatic title to his story. At least it does what it says on the tin: this piece consists entirely of a letter written by a man on his deathbed. It’s tragic, but also a little silly, and I have a abiding fondness for this story for those very reasons.

Fortunately, the folks at Abyss and Apex feel the same way, and gave the Marquis a chance to air his emotional laundry to the world.

The music for this one was Karl Jenkin’s “Passacaglia” — him being, among other things, the guy behind the “diamond music” you hear in the De Beers commercials. I got it off the album Diamond Music, in fact, which is actually quite enjoyable.

This would be the place to name the inspiration for this story, but the truth is that I cannot do so without giving spoilers for one of two things: “Letter Found,” if you already know the source I started from, or the source itself, if you read my story first. And since the source is freaking fabulous (in a much less melodramatic way than this letter), not for love or money would I spoil it. So there are maybe four people on the planet I can talk to about why I wrote this thing. Alas, such is life.

“Letter Found” received an Honorable Mention in Gardner Dozois’ twenty-seventh Year’s Best Science Fiction and was reprinted in The Best of Abyss & Apex, Volume Two. It was also reprinted in my collection Maps to Nowhere.

[It] movingly tells of a man’s love for his wife and their involvement in a rebellion, which led to her death — and how he tried to fix that. (Recommended Story)

The very elegant “Letter Found In A Chest Belonging To The Marquis de Montseraille Following The Death Of That Worthy Individual” by Marie Brennan has the feel of a counterfactual, but I Googled it and there is no such person. The marquis explains to the love of his life how he let her go to save her life, just as his own was ending. Too much more and I’ll give it away.

Even though an experienced reader would see what was happening two-thirds of the way through the piece to a predictable ending, Brennan’s writing is so lyrical I couldn’t wait to get there and see it for myself.

This poignant little story accomplishes a lot with very few words. It’s heartfelt and affecting, despite its brevity. I found myself tearing up. Brennan explains very little, but she shows us so much via the narrator’s tone.

I enjoyed it immensely. 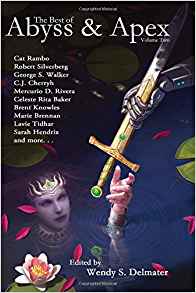 The Best of Abyss & Apex, Volume 2