Snow had fallen the previous day and had already turned to grey slush, but flakes drifting down from the sky promised to gild the dreariness with a new layer of white. To Enhardt, it was an unwelcome sight. The first snow of the year was a sign of winter’s beginning, and every subsequent one reaffirmed that spring had not yet come. He hated winter, and spent as much of the season as he could indoors, huddled by the fire, counting the days until warmth returned. His scarecrow body felt the cold in its joints, and all winter long he creaked around the house, muttering querulous complaints under his breath. Had he possessed servants, his behavior would have driven them to distraction, but Enhardt had neither maid nor manservant, and so he walked through his cold house alone.

The cultural idea behind this story, the Beggar’s Blessing, came to me when I noticed a similarity between several songs: “Gower Wassail,” “A Pace-Egging Song,” and “A Soalin’,” which might be one of my favorite Christmas songs ever. All of them are basically sung from the perspective of someone asking for charity, and wishing prosperity on whoever gives it to them.

Mind you, since I sold the story to the horror magazine Shroud, you can guess I didn’t go anyplace terribly nice with that idea. “Beggar’s Blessing” was published in their second issue, in 2008.

a nasty treat by Marie Brennan 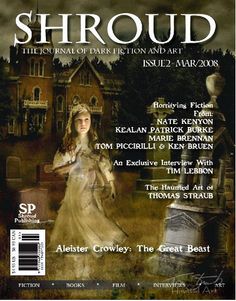