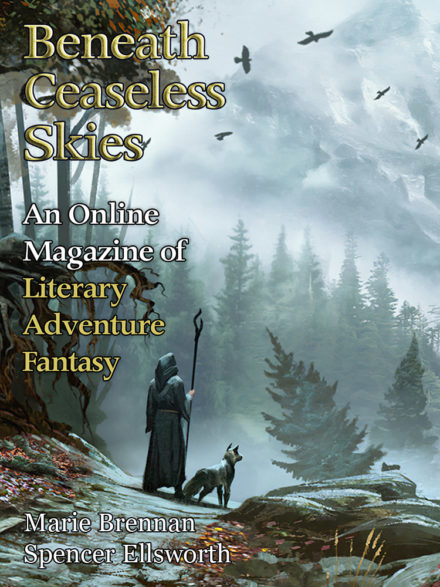 In fire and thunder it was born, vomited up from the guts of the earth in a paroxysm of fury.

The pages for some of my stories mention that they’re noteworthy for the amount of time that elapsed between me coming up with the concept and actually writing the story. And although I don’t generally make this public, some hold records for the length of time it took them to sell.

This one holds the record for the amount of time elapsed between writing the story and even sending it out.

It takes place in the same setting as “A Mask of Flesh,” a world whose various peoples are derived from creatures of Mesoamerican folklore. My intent was always that I would write multiple stories in that setting — I have seedlets for two others on my hard drive — but for whatever reason, the second one I wrote was “Chrysalis.” And, having written it . . . I wasn’t at all sure it worked. At least not for readers who didn’t know the setting already. And since the extant body of work consisted of only one story published in an anthology, odds were that most of them wouldn’t.

Without giving spoilers, this story gives a cross-cut of the setting by having each scene be from the viewpoint of a different character. Furthermore, it’s playing some non-obvious structural games around its central thematic concept. All of which added up to make me question how it would read to anybody other than me . . . and that questioning led me to trunk it immediately after drafting it, back in January of 2009.

But in mid-2019 — more than a decade after completing the draft — I was reminded of the story’s existence, and I decided to take a look at it. Maybe I could rewrite it? To my pleasant surprise, I found the story was actually quite solid, for something that far in the rearview mirror of my craft. Still weird, and I still didn’t know if it would work for anybody else, but the answer to that was to send it to a friend who didn’t know the setting and let her tell me what she thought. She came back with a positive report, so about a year later (in May of 2020) I finally gave it a revision pass and sent it to Beneath Ceaseless Skies.

Whereupon things got even more complicated.

The editor Scott Andrews liked it, but he felt the perspective drifted to a sort of distant voice at the end, and he suggested giving viewpoint to one more character to fix that. He was right about the distance, but unfortunately, adding in that additional viewpoint would wreck all those non-obvious structural games I mentioned before. The solution to that? Give the reader the perspective of a rock. A literal piece of stone — obsidian, to be precise — that’s arguably the main character of the story anyway, as it’s the thing that gets passed from character to character throughout the tale. Which sparked off a lot of very finicky editing around trying to get Rock POV to work, and that wound up stretching out for over a year.

In the end, though, we succeeded. And so, over twelve years after I first wrote the story, I’m delighted to say that I sold “Chrysalis” to Beneath Ceaseless Skies. It was published in issue #347, and you can read it for free online!