This missed posting for some reason, and I only just now noticed. But there is still time to pre-order!

About a year ago, I discovered that February 26th is National Tell a Fairy Tale Day.

Now, like many authors with an interest in folklore, I’ve tackled fairy tales before. I have a whole collection of them, Monstrous Beauty. But that represents only one part of my fairy tale ouevre — the part that’s the most horror-tinged. I have others.

And I thought, why not do something with those?

This happened about a year ago, so it was far too late to do anything for that year’s National Tell a Fairy Tale Day. But I looked ahead to 2019, and discovered that this year, February 26th would be a Tuesday — which is, traditionally, the day of the week when new books get released. 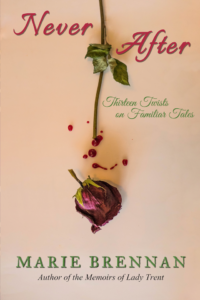 Ladies, gentlemen, and other civilized people, I give you Never After: Thirteen Twists on Familiar Tales. Available for pre-order now; due to be released — of course — two weeks days from now. It’s a tiny little thing; every one of those thirteen stories is flash-length, under 500 words, and two of them are about 100 words apiece, which is why the collection is priced at a mere $0.99 (or whatever that turns into in your local currency). You can pick up both that and Monstrous Beauty for two bucks, and have twenty fairy tales of variously warped sorts — the ones in Never After are not as dark as the ones in Monstrous Beauty, but I wouldn’t call them sweet and innocent, either . . .

Forget perfect princesses, handsome princes, and “happily ever after.” In this collection of thirteen flash-length fairy tale retellings, award-winning author Marie Brennan introduces you to a world of manipulative mirrors, treacherous pigs, and candy houses that will eat you right up. Each one is a subversive little gem, guaranteed to shock the Brothers Grimm.