Step one is to figure out what I want this strap to look like. As I said before, card-weaving can do much more complex patterns than inkle-weaving — but it’s still limited by what you warp onto the loom, so you need to plan ahead. And there’s an extra twist (pun not intended, but very apropos), in that if your pattern doesn’t involve rotating the cards backwards as well as forwards, over time you’ll twist your unwoven warp threads into little ropes. Because I want to keep my first project simple, I went digging through different patterns both in my book and online, and settled on one that’s the tablet version of the “chain” pattern from inkle weaving — same idea, but (because of how card-weaving works) less tightly compressed.

This required me to generate a warping draft. Doing this for inkle-weaving is easy; you have only two kinds of thread (leashed and unleashed), so putting those on separate lines and using different letters to represent the different colors, a single chain pattern looks like this: 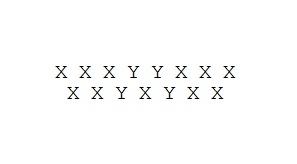 With a card loom, though, you need to plan four threads for each card. Furthermore, it matters whether the threads are warped “up” or “down” — that refers to the direction in which they pass through the card. I wound up making a spreadsheet with cells deliberately shaped to be taller than they are wide (to represent how the threads will look as they’re woven) and color-coded to imply the colors of the threads, and produced this draft:

The letters on the left tell me which hole in the card gets which thread, and the little v’s and carets tell me whether to warp up or down. To weave this, I will first rotate the cards forward four turns, then backward four turns, so I don’t wind up with twisted warps making life difficult at the end of the project. The nice thing about the spreadsheet is, I can copy-paste to make an expanded version that gives me a sense of what the final product will (hopefully) look like: 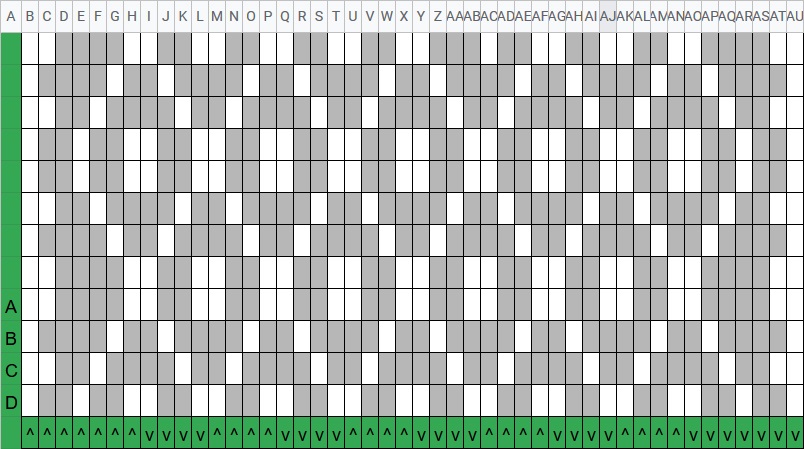 Now, there’s a key piece of guesswork going on here, which is the question of width. How wide your fabric is depends both on the number of threads and the thickness of those threads. Back in my inkle-weaving days, I was decent at eyeballing this . . . but that was a looooong time ago, and also I have zero experience with how this whole four-threads-per-card thing is going to work, with them twisting around each other and all.

Is this a reasonable number of cards for the project? I have no idea. The thread I bought is very fine, so I’ll definitely need more than with some of my projects of yore. But I am straight-up guessing with the draft you see there.

The good news is, I have some leeway to experiment. I don’t want to put a very short warp on the loom and just test-drive with a piece I’ll have to throw away (though it would probably be smart of me to do so), but I suspect my loom isn’t large enough for me to weave all the material I need in one go anyway. (Your material inevitably gets shorter as you weave it, because what were formerly straight warp threads are now going over and under the weft.) So I can weave this, and if it’s too skinny or too broad, I can use it for the “equatorial” straps that go sideways around the box. Then round 2 can be adjusted, and I’ll weave the big loop that will be the one I’m holding in my hand.

But this has introduced one wrinkle to the process. When I originally made my draft, it was narrower — an alternation of three-and-two on the chain, instead of five-and-four. I widened it upon receiving the thread and realizing how slender it was. Alas, I do not own enough cards for the wider draft; I have had to order more from Etsy. I’m waiting on those to arrive . . . and then the warping can begin!