I have a whole pile of projects right now that I am either not permitted to discuss (as in, there’s an NDA and everything) or superstitious about discussing until they reach a firmer milestone. In one particular instance, this means I have not only drafted an entire novel but sent it to my editor, gotten comments in return, and sent back the revised manuscript, all without being able to say a word about what I was working on.

But as of today’s official announcement, that FINALLY changes! 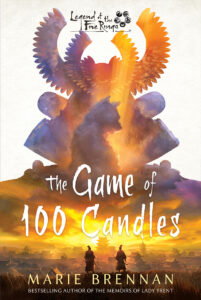 The Game of 100 Candles is, as the title suggests, a sequel to The Night Parade of 100 Demons. It takes Ryōtora and Sekken to Phoenix Clan lands, and from the rural wilds of the mountains to the heart of a powerful provincial court — where more supernatural matters are afoot . . .

This will be out in February of next year!

One Response to “Return to Rokugan!”