I’ve set this up very much at the last minute — as in, it’s coming out Tuesday. But I’m putting out a new short story collection! Down a Street That Wasn’t There pulls together my urban fantasy to date — seven stories set in the real world or something very close to it.

Here’s the thing, though. I scheduled this before the most recent round of inexcusable police brutality took over the news (where it well deserves to be), and . . . I feel weird saying “hey, buy a thing from me!” when there are much more urgent needs out there. So let me say this: if you have already donated to a bail fund or Black Lives Matter or the ACLU or some other organization fighting for badly-needed justice, or if you’ve made purchases to support some local Black-owned businesses, and you want to pick up this collection, then thank you. But if you haven’t, I ask you to instead spend that money where it will do more good. I could say “all proceeds for now will go to X charity,” and there’s a sense in which that will be true, because my household’s been making a lot of donations lately and isn’t done yet. There are two reasons I’m not framing it in those terms, though. The first is that I don’t want to feel like I’m using a good cause to promote my book — it should be the other way around. And the second is that I think it’s more valuable to encourage lots of people to interface with these organizations, to take action directly rather than indirectly (i.e. through me).

So: please put the needs of the vulnerable ahead of this book. I’m still putting it out because I don’t want to leave Book View Cafe with a hole in its publishing schedule and because even when the world is on fire, we still need stories and diversions and entertainment; in some ways we need them even more badly in such times. But I really mean it. Donate if you can.

And if you’ve already done that, well, I have a new short story collection for you!

DOWN A STREET THAT WASN’T THERE

Step beyond the ordinary . . .

Beneath the surface of our reality lies a world of magic and danger — a world where buildings have guardian spirits, shapeshifting coyotes prey on the hopeful and the desperate, and ancient traditions prepare for an apocalyptic future. These seven urban fantasy tales from award-winning author Marie Brennan paint the everyday with a layer of wonder, inviting you to imagine what could lie just around the corner. 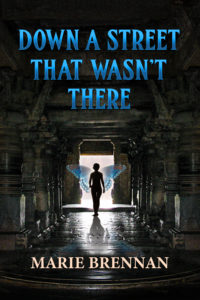