I have been sitting on this news for A YEAR AND A HALF.

Not too long after relaunching the game Legend of the Five Rings (and its associated story), Fantasy Flight Games announced that they would be doing a line of related novellas, one per clan. Since most of the stories I’ve been writing for them have been about the Dragon Clan, I leapt on that immediately, with a pitch for a story about a character I helped develop for the story in the first place. 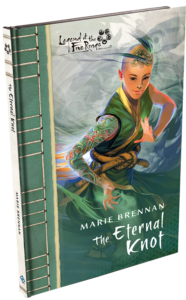 For those of you not familiar with L5R, The Eternal Knot is a reasonable entry point: it doesn’t require you to know anything about the setting or the ongoing story. It does very clearly take place in a world that’s much larger and more complex than this particular narrative needs, and there are some threads left dangling at the end in a way that is obviously bait for future fiction, but the story it tells is self-contained. So if mystical tattooed monks sound like your jam, you can pre-order it here!