I neglected to mention this on the release date, but: A Natural History of Dragons is out in French! (Or rather, Une histoire naturelle des dragons.) That makes the first translation to hit the shelves, though there are others in progress.

As it is now four weeks to the release of In the Labyrinth of Drakes, it seems a prime time for an ARC giveaway! All you have to do is tell me — in comments, by email, or on Twitter — who your favorite character from the series is, OTHER than Isabella. (Ruling her out because, judging by the fanmail I get, she’d be 90% of the answers.) Deadline is noon PST tomorrow; I’ll pick a winner at random and ship out the ARC.

It’s boggling enough that for the first time since I started writing the Onyx Court series, there are photographs from (nearly) the period in which I’m writing.

Every so often, one of them hits me like a punch to the gut: 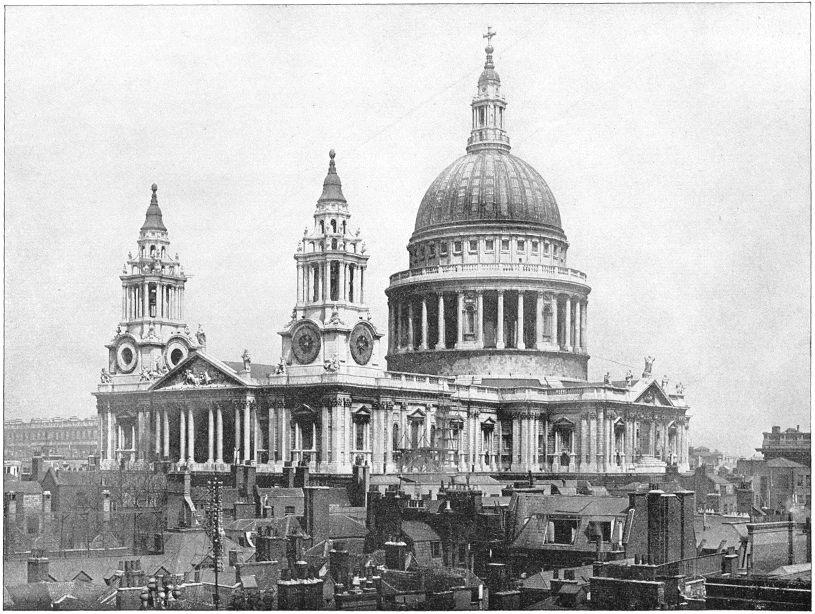 YOU USED TO BE ABLE TO SEE ST. PAUL’S CATHEDRAL.

I knew this, of course. There are all kinds of references, and even paintings, to how the churches of the City used to soar over everything around them, rather than being lost in the cracks. But holy shit. Not just the dome, not just the western towers, but the body of the church. Visible. In more than glimpses caught between the buildings that crowd around it.

Obviously this photo was taken from the roof of a nearby building (or else something in the vicinity of Blackfriars was decidedly taller than everything else around it). You can get semi-decent shots of the cathedral even now, if you could persuade one of the places at the top of Ludgate Hill to let you onto their roof. But nothing with this kind of sight-line and openness, because these days, too many buildings rise higher than the top of the cathedral steps.

It really is a window into the past. The late Victorian period — this photo was published circa 1891 or 1892 — but also more than a hundred years before then, ever since Wren built the new cathedral, because the buildings would have been mostly about that height. Paste in an image of old St. Paul’s, with or without spire, and you’ve got a good idea of what the area looked like centuries ago.

For a London-history geek like me, this just blows the top of my head off.

Why do I not have an icon for hopping up and down in glee?

Earlier today, kniedzw posted about a program called Stellarium. Alas, it seems to base its Julian/Gregorian switch on the continental one in 1582, so in order to calculate anything for Midnight Never Come I have to do the adjustment myself — England didn’t switch calendars until 1752, on account of viewing calendar reform as some kind of sketchy papist plot. But with that done, I could, if I chose, find out what phase the moon is in and where it stands in the sky when Lune goes sneaking outside on March 6th, 1590, to meet with someone in the orchard at Richmond.

But the biggest help is much less impressive. All I have to do is type “ncal -J 1590” into my unix prompt on sundell.net and I can find out what the dates should be for certain events I have taking place on Fridays, because my computer obligingly spits out a Julian calendar for the full year. And if I stick “-e” into that command, I can find out the date of Easter that year, which is actually relevant to the plot.

The fact that I can get this kind of information without leaving my office chair — okay, so at the moment I have to walk into kniedzw‘s office for Stellarium, since I haven’t installed it on my own computer — it’s just phenomenal. I said last year that I couldn’t imagine running Memento without the Internet, since even if it was occasionally inaccurate, it offered me a far greater wealth of information with far greater ease than anybody could have dreamt of ten years ago. I likewise couldn’t imagine writing Midnight Never Come without computers. Aside from the issues of writing a hundred thousand words longhand, I wouldn’t have Stellarium, the unix cal command, online access to the Oxford Dictionary of National Biography, and dozens of other resources I make use of every single day.

Computers are the most awesome things EVAR.