Yeesh! Having two novels out in two weeks is not good for my brain: yesterday I was running around announcing the publication of The Night Parade of 100 Demons everywhere but, apparently, here. 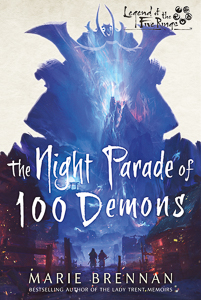 But the good news is, it is still out today! And for quite some time to come, but of course if you’re interested in it, I suggest buying it soon. (Er, if you’re in North America or reading it in ebook. Due to covid messing with distribution, the paperback won’t be available via UK channels until April 15th.) This is, as the cover shows, a Legend of the Five Rings novel, but if you’re not familiar with the game, don’t let that put you off: the novels Aconyte is publishing are very much designed to be read by anybody. If you would be interested in a book from me that’s set in Japanese history and chock full of folkloric creatures, characters protecting their secrets, an investigation into some mysterious disturbances, and a queer romance, then this will be up your alley; just swap in “country based on historical Japan” and you’re good to go.

And SEMI-RELATED — I will be appearing on The Story Hour tonight! My plan is to read “As Tight as Any Knot,” the Rook and Rose short story I had out in Beneath Ceaseless Skies last month.

On Monday The Imperial Advisor (a major L5R site) got to do the cover reveal for The Night Parade of 100 Demons, along with an interview (which you can read at that link). Today, I get to show it to you! 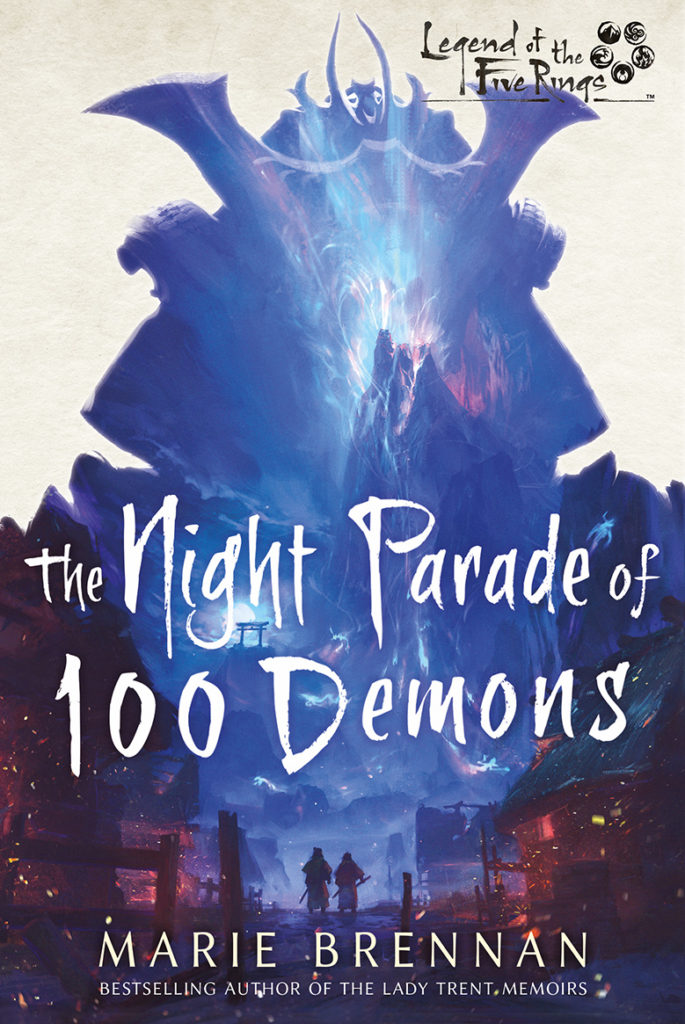 This one’s due out February 2nd, and you can pre-order it here.

I got cover flats for the re-issues of Doppelganger and Warrior and Witch yesterday, and in looking today, I see that Amazon has them listed. So if you’ve been curious about them, they’ve been recast as Warrior and Witch — not the most original retitling ever, but man, I tried and failed to come up with anything better. At least this way it’s easy to tell the books go together, both in terms of titling and covers. (And no, they didn’t just flip the picture over for the new cover, though obviously it is meant to be extremely simliar. It is a new picture.)

So yeah. August street date for those, both at the same time, so anybody who finds me via Midnight Never Come will easily be able to lay their hands on other stuff I’ve written. I have no idea if the old versions will get pulled when that happens, of if they’ll coexist for a little while on the shelves. At least they’ve printed on the backs of both that they’re reissues of old titles, so people won’t feel like we’re trying to pull a fast one on them; also, they’ve made the sequel’s cover copy a little bit less spoilericious. Not completely so, but I’m not sure it’s possible to write useful cover copy for it that won’t have any spoilers.

It’ll be neat to see myself suddenly jump up to a more substantial shelf presence, with three books out there at once. I don’t know what quantities they’ll be shipping of any of them, but it should be pretty good.

Put the Victorian Age down and back away from it, slowly.

Why? Because you aren’t ready to write that book yet. You know it and I know it; there’s no disagreement there. But do you know what will happen if you do another nosedive into research like last time? You will get sick of the Victorian period, before you even start writing the book. So slow down. That deadline is not for another ten months.

Play with this shiny over here instead. Wouldn’t you rather be reading YA urban fantasies than books about the Victorian sewer system?

I’d appreciate more than just a grudging nod, Brain. Or else I’m going to start thinking there’s something deeply wrong with you.

That’s better. The Victorian Age will still be waiting when you come back, don’t worry. And in the meantime, we’re going to have fun with some other things.