It’s been a while since I’ve done one of these posts! I got too busy to keep up with coordinating them, I’m afraid. But my friend David Coe has a new book out, so I’m delighted to introduce you all to Radiants, a supernatural thriller with a queer, teenaged protagonist. Sparking this story to life required him to unfollow some earlier, well-meant advice — but I’ll let him tell you that tale himself . . . 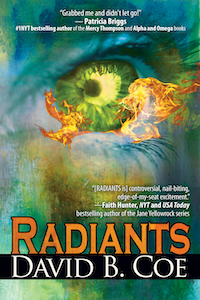 A couple of decades ago, while working on my debut fantasy series, the LonTobyn Chronicle, a first-contact story about two societies, one pastoral, one highly technological, I mentioned to my editor an idea I had to market the series as “an ecological fantasy.” He told me, in no uncertain terms, that this was a terrible idea.

“No one,” he said (I’m paraphrasing a little), “wants to read an ecological fantasy. Keep politics and social issues out of your work. Just write your story.”

Over the years I have defied that advice again and again, though I have tried to do so with subtlety and nuance. I didn’t take the ecological themes out of that first trilogy — and, to be fair to my editor, one reviewer writing for a prominent publication strongly objected to the presence of those themes. In several subsequent series, I have dealt with issues ranging from race to mental illness and addiction, but always I have done my best to keep my social content in the background, visible to those who care to look for it, but unobtrusive.

Fast forward to my newest work, Radiants, a supernatural thriller to be released October 15 from Belle Books. When I showed my initial draft of the novel to my agent a couple of years ago, before we began to shop it to publishers, she came back to me with surprising feedback. She told me the book felt a little flat to her. This was not the part that surprised me; I sensed the lack of energy as well, but was at a bit of a loss as to how to fix it.

What I hadn’t expected was her advice. “Publishers these days want books with some social relevance,” she said. “You’re so political, so passionate in your opinions. Let that guide you in your revisions.”

As soon as she said this, my mind began to whir.

Radiants tells the story of a teenaged girl, DeDe Mercer, who has the ability to control the thoughts of others. She can step into someone’s mind, make a decision for them, and then jump back out, leaving her will imprinted on their thoughts. She and other Radiants (who have a variety of abilities) access their talents by drawing upon planetary energy systems — the rotational and orbital energies of the earth and moon. And though DeDe has been warned by her mother not to use her power at all, she is confronted by a situation that leaves her with little choice. DeDe’s abilities come to the attention of government agencies, several of which send operatives after her, all hoping to turn her into a tool. Or a weapon. I loved the set-up from the start, but armed with my agent’s advice, I saw new possibilities.

Those who seek to use her, who seek to create an army of Radiants, don’t care about the consequences of their ambitions. But DeDe soon realizes that her deceased father, who was also a Radiant, saw the danger. Too many Radiants drawing upon those planetary energy systems threaten to destabilize earth’s orbit and rotation, imperiling the very survival of the planet.

DeDe’s decision to use her ability despite her mother’s objections is prompted by an injustice against her closest friend (and crush), Kyle, who is genderqueer. Kyle is bullied for what feels like the hundredth time, and rather than just taking it, they fight back, bloodying the nose of a much larger student. Though they were defending themself, the principal of the high school decides to suspend them and not the instigator. DeDe refuses to let this decision stand and uses her power to change his mind, setting in motion the events of the novel.

The government agencies pursuing DeDe and her family stop at nothing to have their way, and think nothing of kidnapping DeDe’s mother, splitting the family. DeDe and her brother, Miles, who is about to come into his power, fight back to win their mother’s freedom, a conflict that forms the narrative core of Radiants.

An allegory for global warming. A story about gender identity and bigotry. An indictment of governments using their power to separate children from their parents.

Once I recast the plot in these terms, my passion for the book grew exponentially. I still loved my characters and narrative, but now I also cared deeply about my themes, my underlying message. I didn’t feel the need to disguise these elements of my storytelling. Instead, I reveled in them.

Don’t get me wrong: Radiants is first and foremost a thriller. It might well be the most tightly paced, action-packed book I’ve written. I don’t bludgeon my reader with politics. But neither do I shy from issues that matter to me.

And once I allowed myself to write this way, my novel came to life.

Many thanks to Marie for hosting me on her site!

DeDe Mercer is a Radiant who can control other people’s thoughts, make them do what she wants. For years she’s controlled her power, keeping her secret, never using it on anyone—until the day she had no choice.

Now the government is after her, after her brother, too, because he’ll come into his power before long. The Department of Energy, the Defense Intelligence Agency, Homeland Security — they all want her, and they’re willing to do anything, hurt anyone, kill if necessary, to make her their weapon.

But DeDe has had enough. They think she’s a weapon? Fine. They’re about to find out how right they are.

David B. Coe is the award-winning author of more than two dozen novels and as many short stories. He has written epic fantasy — including the Crawford Award-winning LonTobyn Chronicle — urban fantasy, and media tie-ins, and is now expanding into supernatural thrillers with Radiants and its sequels. In addition, he has co-edited several anthologies for the Zombies Need Brains imprint.

As D.B. Jackson, he is the author of the Thieftaker Chronicles, a historical urban fantasy set in pre-Revolutionary Boston. He has also written the Islevale Cycle, a time travel epic fantasy series that includes Time’s Children, Time’s Demon, and Time’s Assassin.

David has a Ph.D. in U.S. history from Stanford University. His books have been translated into a dozen languages. He and his family live on the Cumberland Plateau. When he’s not writing he likes to hike, play guitar, and stalk the perfect image with his camera.

2 Responses to “Spark of Life: David B. Coe on RADIANTS”