For nearly two and a half years now, I’ve been using 4thewords, which is a writing gamification site. You queue up monsters and defeat them by writing — or, if you’re me, by copy-pasting the words I’ve written elsewhere — which gives you XP and various item drops, which you then use to complete quests and progress in the storyline.

I think I’ve mentioned this site here before, but I’m bringing it up again for three reasons:

1) I know a lot of people are having trouble writing right now, and if gamification and pretty graphics are the kind of thing that can motivate you, this might help.

2) The people who run this site (a very small cadre based mostly in Costa Rica) are really good about trying to make things inclusive and welcoming. Case in point: right now we’re in the middle of a 25-day special Pride event, amped up from the usual 10 days because so many in-person Pride events have been canceled. There is all kinds of related gear to customize your avatar with, including no less than fifteen palette swaps to represent a bunch of different Pride flags — not just the most well-known rainbow but flags for bisexual, non-binary, polyamorous, and other identities. This year they also wrote code for a virtual Pride parade, which you can choose to have your avatar march in; mine is there, decked out in straight ally gear (and a giant feather butt fan I picked up during the Carnival event a while back).

Ahem. What I mean to say is, they’ve also responded to the pandemic by helping to support site users whose book releases may be affected. I tossed my name into the hat back when I thought The Mask of Mirrors was going to be coming out in November, so this is now more in advance of the release than I expected it to be, but . . . 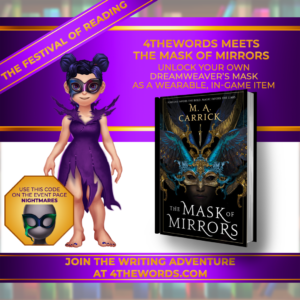 They made a wardrobe item that’s inspired by a mask in the novel!

That is our first public piece of fan art for this series. And the Festival of Reading is going to continue for 44 days (not counting the eight teaser days they had in the weeks preceding the Festival itself), each of which comes with its own special reward.

So basically, it’s a really wonderful and supportive community, and a fun way to motivate yourself for writing, with a story about questing to save the world from a corrupting Dust. It says quite a bit that I’ve stayed active there for two and a half years, alternating between normal quests and the regularly-scheduled special events. I would link you to neat features like the Pride parade, but I think you have to be a subscriber to see those; however, the subscription cost isn’t very high, and there’s even a community pool where people who can manage a little extra donate subscription time to be distributed to users who might not otherwise be able to afford it. If it’s something that might be useful to you, I encourage you to check it out.

One Response to “4thewords, Fan Art, and Pride!”