I’ve said before that I crave more fantasy novels incorporating that revolutionary-yet-simple technology known as the printing press. It turns out Mike Reeves-McMillan is on the same wavelength, because his lates Gryphon Clerks novel is all about newspapers and the power they have to change things. Not to mention little things like freedom and racial equality and social change — y’know, things that are maybe just a wee bit pertinent nowadays. But I’ll let him explain . . . 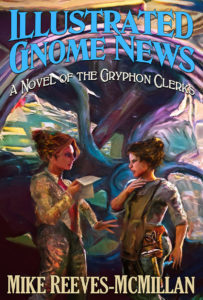 Illustrated Gnome News came to life when one of the protagonists found some people who were worse off than she was, and decided she had to help them.

Let me back up for a minute. Illustrated Gnome News is the sixth novel in my Victorianesqe magepunk Gryphon Clerks series. Although it is a series, linked together by the setting and with overlapping characters and key events, each book stands alone as a complete story and contains all the backstory you need in order to orient you to what’s going on, so you can start anywhere you like.

The most important event driving the stories so far is Gnome Day. The gnomes have, for centuries, been effectively slaves of the dwarves, but because slavery is so very illegal in all human realms (the humans having been slaves of the now-vanished elves), there’s been a long-standing legal fiction that says that the dwarves don’t own the gnomes themselves; they only own their service.

A few years before the start of Illustrated Gnome News, the local human ruler, for her own well-considered reasons, declared that this was a distinction without a difference, and any gnomes outside the self-governing dwarfholds should consider themselves free (and, not coincidentally, available to work for the humans directly, cutting out the dwarven middlemen). The day of this proclamation became known as Gnome Day, and kicked off two wars; one of them — the Underground War with the dwarves, conducted mostly by means of economics — is still underway, and showing no signs of slowing down.

The rising generation of gnomes is now asking: So, we’re free to . . . do what, exactly? Are we, for example, free to work at whatever we like, even if it doesn’t match the rigidly gendered concept of work that’s been enforced by the dwarves for centuries? (Men work at “hard” crafts like engineering; women at “soft” crafts involving food and cloth.) Are we, perhaps, free to have non-traditional relationships? And if not, why not?

At the start of the book, though, Ladle, the overworked editor of the only gnomish newspaper, the Illustrated Gnome News, isn’t thinking about that. She’s focussed on day-to-day problems: the newspaper is losing money; the owner has foisted his annoying and frankly useless daughter on Ladle as advertising manager; and while she’d like to spend more time with the golden-voiced Cog, who runs the magepunk equivalent of a radio station in the next office, both of them are working far too hard to do anything about it. She’d love to do what the paper was founded to do — promote the true emancipation and prosperity of gnomes with hard-hitting investigative reporting — but instead she’s stuck writing about trivia, because it takes less energy and attracts more eyeballs.

The moment of inflection, for her and for the story, is when a young gnome writes to the paper to say: my friends and I are on the street because we want to live our lives in ways our parents can’t accept. But instead of following our dreams, we’re living in squalor and being exploited by gangs. Can your newspaper help us?

The answer to that question not only blows Ladle’s daily grind wide open and gives her something to fight for, it ends up being key to the uncovering of a plot to set gnome freedom back for years. Along the way, the protagonists find unexpected friendships, alliances, and loves, and dare to risk everything to strive after their authentic lives in the face of what’s expected of them.

They may be putting out a newspaper, but there are some things they don’t want becoming news.

The Illustrated Gnome News is the only newspaper serving the newly emancipated gnome community, but there are days when Ladle, the paper’s overworked editor, thinks that’s because nobody else is stupid enough to try to run one. She has to balance not scaring off all their advertisers with putting out a paper that stands for a better future for all gnomes. Including those gnomes who don’t match up to traditional ideas of what’s proper.

One of these is her friend Loom, the first gnome woman to qualify as an engineer. But Loom has a secret that would shock conventional gnomes even more than that, and must somehow find a way to pursue her own happiness amidst the wider struggle to turn gnome emancipation into true freedom.

Mike Reeves-McMillan lives in Auckland, New Zealand, the setting of his Auckland Allies urban fantasy series; and also in his head, where the weather is more reliable, and there are a lot more wizards. He writes a secondary-world steampunk/magepunk series, the Gryphon Clerks, and a Leverage-meets-Lankhmar sword-and-sorcery heist series, Hand of the Trickster, in addition to Auckland Allies. His short stories have appeared in venues including Daily Science Fiction, Futuristica, Compelling Science Fiction, and Cosmic Roots and Eldritch Shores, and he blogs about writing and reading fiction at The Gryphon Clerks.