A while back, I started up a series of guest blogs called “Spark of Life,” where authors could talk about one of my favorite parts of writing: those moments you didn’t plan for, where it seems like your characters or your plot have taken on a life of their own. I got busy and fell out of arranging these posts, but I’m reviving it now — starting with a post from D.B. Jackson that resonates so hard for me. In my case it was a line earlier in the same book, rather than a previous one . . . but I seriously don’t know how I would have pulled together the final confrontation in Warrior if it weren’t for a totally unexpected line I’d written a couple of months before. 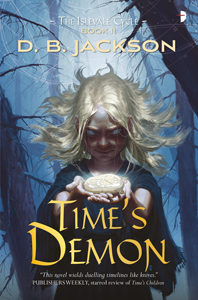 The Spark of Life moment I had with my newest book, Time’s Demon, the second volume in my Islevale Cycle, actually began with a throwaway line in book one, Time’s Children. The circumstances take some explaining, so please bear with me.

The Islevale novels are time travel/epic fantasy. They are set in an alternate world that is home to Walkers (my time travelers) and humans who wield several other sorts of magic. As the title of book II suggests, it is also home to various sorts of demons – Ancients, as they prefer to be called – including Tirribin, or time demons. Tirribin appear as children, though they live for centuries. They feed on the years of humans, and since they consume years as they spend them, they never age. They are predators – canny, dangerous, but also childlike in their capriciousness, their curiosity, and the fact that they can be distracted from the hunt with a riddle. Better make it a good one, though . . .

Walkers and Tirribin share an affinity for time, and so Walkers don’t have to fear time demons quite the way other humans do. Early in book I, when one of my heroes is still training to be a Walker, she befriends a Tirribin named Droë, and mentions this to one of her instructors. The instructor warns her of the dangers, even for a Walker, of interacting with any Ancient. “You know Tirribin can be dangerous. One is said to have killed a trainee many years ago, before I came to Windhome.”

That’s it. That was the line. I had no particular incident in mind when I wrote it, although I believe that somewhere in the depths of my hind brain I knew that I would use the thread later.

Skip forward to my work on Time’s Demon, the second book. I knew that I wanted Droë to figure prominently in this novel – hence the title. I also knew that I wanted to give some vital back story on one of my other key characters: the assassin, Quinnel Orzili. Orzili is not a Walker, but rather a Spanner, someone who uses magic to travel great distances in mere moments. Spanners, like Walkers, are trained in Windhome.

The problem was, I had too many plot threads and I wasn’t sure how they all connected. I was still following my heroes from book I, including the young woman who receives that warning from the instructor in Windhome. I had Droë’s story. And I had Orzili’s narrative threads as well – the backstory and the “present” story. All of these plot lines needed to be included in the book and I knew that for this middle volume to work, for it to feel complete and at least somewhat self-contained, all of its disparate storylines needed to cohere in some way.

As it happens, all of the Islevale books, including the third volume, Time’s Assassin, which I am completing now, have defied my attempts to outline them. I’m a plotter – I like to plan my narratives in advance. I always write with an outline. Or I did, until this series. It’s ironic in a way: Here I am writing time travel, which is incredibly complicated on its own, in a sprawling epic fantasy with multiple plot threads and point of view characters. If ever I needed to outline any set of novels, these were the ones. And I just couldn’t do it. To this day, I’m not sure why. Different novels demand different approaches, and these books demanded that I wing it.

So I was writing the early chapters of book II, in which I explore Orzili’s backstory, and Droë shows up. I hadn’t planned to write her into this part of the series, and I still don’t know what made me do it, but the moment I re-introduced her to my readers, I knew: Droë was, in fact, the Tirribin who killed a trainee, and that trainee was Orzili’s friend. The boy’s death at the hands of a time demon sets in motion the key events that lead to Orzili becoming an assassin. That event, first mentioned in a throwaway line in the first book of the series, becomes a key moment in my story arc – the nexus connecting my heroes in book one, my title character for book two, and the key villain for the entire series.

Plotting a novel, or a series for that matter, is an inexact undertaking. Even when we can outline, even when we think we know precisely what should happen, our characters have a way of surprising us. That is both the joy and the challenge of writing fiction. We want our characters to do and say the things that advance our narratives, but we also want them to act and sound and feel to our readers like real people. And often that means allowing them the agency to do and say things we don’t expect. I hadn’t known that Droë would show up when and where she did in Time’s Demon. But when she did, it breathed new life into the entire novel. It was the spark I needed to make my plot points come together.

Fifteen-year-old Tobias Doljan Walked back in time to prevent a war, but instead found himself trapped in an adult body, his king murdered and an infant princess to protect.

Now joined by fellow Walker and Spanner, Mara, together they much find a way to undo the timeline that orphaned the princess and destroyed their future. But arrayed against them are assassins who share their time-traveling powers, and hold dark ambitions of their own. And Droë, the Tirribin demon on a desperate quest for human love, also seeks Tobias for an entirely different reason.

As these disparate lives converge, driven by fate and time and forces beyond nature, Islevale’s future is poised on a blade’s edge.

D.B. Jackson is the pen name of fantasy author David B. Coe. He is the award-winning author of more than twenty novels and as many short stories. His newest novel, Time’s Demon, is the second volume in a time travel/epic fantasy series called The Islevale Cycle. Time’s Children is volume one; David is working on the third book, Time’s Assassin.

As D.B. Jackson, he also writes the Thieftaker Chronicles, a historical urban fantasy set in pre-Revolutionary Boston. As David B. Coe, he is the author of the Crawford Award-winning LonTobyn Chronicle, as well as the critically acclaimed Winds of the Forelands quintet and Blood of the Southlands trilogy; the novelization of Ridley Scott’s movie, Robin Hood; a contemporary urban fantasy trilogy, The Case Files of Justis Fearsson; and most recently, Knightfall: The Infinite Deep, a tie-in with the History Channel’s Knightfall series.

David has a Ph.D. in U.S. history from Stanford University. His books have been translated into a dozen languages. He and his family live on the Cumberland Plateau. When he’s not writing he likes to hike, play guitar, and stalk the perfect image with his camera.

One Response to “Spark of Life: D.B. Jackson on TIME’S DEMON”