Like most people who don’t know Lovecraft’s fiction all that well, I associate him pretty much entirely with coastal New England towns. I didn’t know, until I read Ruthanna Emrys’ words about her sequel Deep Roots, that he also wrote about New York City. Of course in typical Lovecraftian fashion he found it utterly horrifying — but for Ruthanna, it’s an opportunity for her Deep One protagonist to rebuild her community. 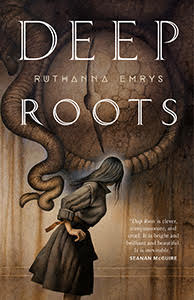 The spark for Deep Roots came years before I wrote it. Years before I read Lovecraft, or imagined Aphra’s first steps into freedom as she left the internment camp, or thought up the details of her family’s life beneath the Atlantic. That spark struck, and sputtered out, in half a dozen stories before this one: two chapters of a cyberpunk dystopia in high school, scattered post-apocalyptic dreamworlds, a half-written urban fantasy about magical infrastructure failure. And at long last that spark caught, and burned, for the second Innsmouth Legacy book.

Aphra’s insular community of amphibious humans—considered monsters by their neighbors—was destroyed in a government raid when she was twelve. She spent eighteen years imprisoned, watching her friends and neighbors die one by one in the bone-dry air of the desert internment camp, finally released at the end of World War II into a world she barely recognized. In Winter Tide she returned to the ruins of Innsmouth, hoping to recover the esoteric knowledge buried there. In the process she found new family, made fraught alliance with the government that once caged her, and came away determined to rebuild what they destroyed.

Aphra’s story is, among other things, a transformation of H.P. Lovecraft’s wildly creative and infamously bigoted horror stories. Winter Tide took place among his imagined Massachusetts coastal towns: Arkham, Kingsport, and of course the remnants of Innsmouth. Lovecraft found such towns scary because they were full of people not descended from rich white Anglo-Saxons, and also old houses. Aphra finds them scary because they’re full of people who abetted or ignored her family’s destruction.

But small New England towns weren’t the only places that Lovecraft thought terrifying. He spent a few years living in New York City—and his stories and letters from that time are full of vile rants against the immigrants living (and horror of horrors, speaking languages other than English) there.

Some of those immigrants were my family. He described them, or people much like them, with the same language he used for his invented monsters.

My parents moved from New York to rural Massachusetts a few years before I was born. But I grew up visiting the city. I learned to find my way around the subway, and keep my balance as the trains juddered beneath the street. To walk in starling synch through the crowded sidewalks. To gravitate to menus describing all the treasure you can carry through Ellis Island, and love foods that couldn’t be found anywhere on Cape Cod. And every time we crossed the bridge into Queens, I could feel the city’s heartbeat, a thrumming, wakeful energy linking me to millions of people jostling to do those same things.

I tried to write that rhythm, and that sensory palette, for years. The smell of the subway and the primal shriek of the train coming in, the echo of tiled foyers in Greenwich Village, the music of all those languages that Lovecraft feared. And it never quite fit—it didn’t belong to the cyberpunk assassin or the meditative AI. It belonged, it turned out, to Deep Roots.

Of course Aphra would go to New York. It was only logical: she wants to find her remaining relatives on land, and you can find ten of anything there. But New York also accentuated her internal conflicts. Aphra grew up in a small community of people who shared a culture and a faith and a set of assumptions rarely found outside their walls—and she thrived there. But whatever she does, she can’t rebuild that. Even if she finds a town’s worth of people with Deep One ancestry, they won’t have grown up there. They won’t take the same things for granted. The family she’s making for herself now includes people from many cultures, many faiths, many sets of assumptions. So New York, with all that cosmopolitan community that I love and Lovecraft hated, is both the opposite of what she finds comfortable, and the epitome of the new kind of life that intrigues and terrifies her.

So that’s the spark—that rhythm I’ve felt since childhood and can imagine in my sleep, finally finding its place in a late ‘40s New York full of Deep Ones and aliens and—truly terrifying—ordinary humans.

Ruthanna Emrys’ Innsmouth Legacy, which began with Winter Tide and continues with Deep Roots, confronts H. P. Lovecraft’s Cthulhu mythos head-on, boldly upturning his fear of the unknown with a heartwarming story of found family, acceptance, and perseverance in the face of human cruelty and the cosmic apathy of the universe. Emrys brings together a family of outsiders, bridging the gaps between the many people marginalized by the homogenizing pressure of 1940s America.

Aphra Marsh, descendant of the People of the Water, has survived Deep One internment camps and made a grudging peace with the government that destroyed her home and exterminated her people on land. Deep Roots continues Aphra’s journey to rebuild her life and family on land, as she tracks down long-lost relatives. She must repopulate Innsmouth or risk seeing it torn down by greedy developers, but as she searches she discovers that people have been going missing. She will have to unravel the mystery, or risk seeing her way of life slip away.

RUTHANNA EMRYS lives in a mysterious manor house on the outskirts of Washington, DC, with her wife and their large, strange family. Her stories have appeared in a number of venues, including Strange Horizons, Analog, and Tor.com. She is the author of the Innsmouth Legacy series, which began with Winter Tide. She makes homemade vanilla, obsesses about game design, gives unsolicited advice, and occasionally attempts to save the world.