I’ve talked before about how some of my stories have pivoted on pieces of music, with lyrics or just the general feel making my subconscious decide which way the plot needed to go. And the entire Great Cataract sequence in The Tropic of Serpents? That came from a photo of Iguazu Falls. So it’s no particular surprise to me that not just the initial inspiration but the spark of life for Kate Heartfield’s Armed in Her Fashion came from a painting. 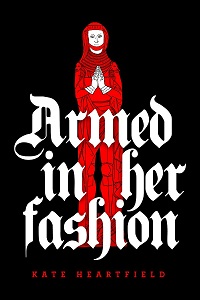 My debut novel, Armed in Her Fashion, was inspired from the beginning by a piece of art: Dulle Griet by Pieter Bruegel. I suppose it was only natural that when I got stuck, near the end of the first draft, I returned to the painting for fresh inspiration.

Bruegel was a 16th century painter in the Netherlands. He was influenced by the monstrous, surreal visions in the paintings of Hieronymus Bosch, a century before. But Bruegel merged those grotesque imaginings with images of ordinary peasant life, and in Dulle Griet, we see a very ordinary-looking woman, holding a frying pan, leading a raid on the mouth of Hell.

Griet herself, a traditional Flemish figure who sometimes represents greed or shrewishness, was the beginning of my story. I wanted to know what would lead a woman to raid Hell; what was she looking for? What could she hope to gain? What could she teach us about how women have provided for themselves and their families throughout human history, and about how their communities saw them?

I set my own version of Griet in the Bruges of 1328, in a city under siege. Margriet de Vos is very ordinary: a wet-nurse, and a widow. Determined, pragmatic, sharp-tongued and old enough not to care what names people might call her.

But the weirdness in the background of Bruegel’s painting influenced the novel’s world. This is an alternate version of 14th century Bruges, in which monsters are very real. The Hellbeast in my novel is a literalization of the Hellmouth that appears in Bruegel’s painting, which is itself a late version of the Hellmouths that appear in medieval European art. As I considered the amalgamations of human figures with musical instruments, birds and devices that appear in so many Bosch and Bruegel paintings, the novel began to explore the promise of body modification, and the horror of non-consensual weaponization of the body.

As I neared the climax of my plot, I knew what had to happen, but I didn’t know why; I didn’t know what events in the world of the story could force my plot in the direction I needed. One day, I glanced at Bruegel’s painting again, and I realized there was one element I had not yet included in the novel: Eggs. They’re everywhere in Bosch and Bruegel. Maybe they’re an alchemical symbol, or maybe they signify greed, or gluttony, or fragility, or the promise of new life. Probably all the above. I knew what they signified for me: a deeper level of world-building, and a new twist in my plot. They represented change and renewal, and I knew right away what these eggs were and why they mattered to my characters.

Like many writers, I often turn to the art created by others when I feel my creative well running dry. Often, that means putting on a piece of music or watching a movie. But when I really need to recharge, I go to the art gallery.

In 1328, the city of Bruges is under siege from the Chatelaine of Hell and her army of chimeras. At night, revenants crawl over the walls and bring plague and grief to this city of widows.

One of those widows, Margriet de Vos, will do anything to make sure her daughter’s safe, even if it means raiding Hell itself.

Kate Heartfield is the author of Armed in Her Fashion, a historical fantasy novel from ChiZine Publications, and The Road to Canterbury, an interactive novel from Choice of Games, set for release in spring 2018. Tor.com Publications will publish two time-travel novellas by Kate, beginning with Alice Payne Arrives in late 2018. Her fiction has appeared in magazines and anthologies including Strange Horizons, Podcastle, and Monstrous Little Voices: New Tales from Shakespeare’s Fantasy World. Kate is a former newspaper editor and columnist and lives in Ottawa, Canada. You can find her at her website or on on Twitter.