Gods are hard to write about in a convincing manner. Too often they seem like plot devices, or else like ordinary characters who happen to have a lot of power. But some authors manage to strike the right balance of personality and numina . . . and sometimes the route to that balance goes off the expected map. Here’s Bryan Camp’s account of how Baron Samedi came to life for him in The City of Lost Fortunes — and hey, maybe if we make pleading puppy-dog eyes, he’ll tell us the rest of the story! 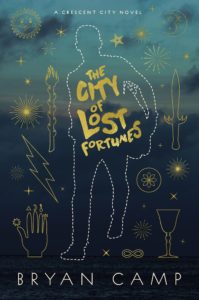 Even though I wrote and rewrote this novel for a decade, I didn’t truly know what I was trying to write, or how I should go about doing it, for years. To learn those two details, I had to travel to a sleepy little town in central Mexico. It was there that Baron Samedi, one of the loa of the voodoo faith, sparked to life for me, and through him, the whole novel.

It might seem strange that I came to understand the voodoo guardian of the cemetery by leaving New Orleans, a city filled with cemeteries and a place where voodoo looms large in both the popular imagination and in actual practice. It’s certainly not why I went there. I was just trying to get a degree. At the time, I was earning an MFA from the University of New Orleans, through their Low Residency program. It was a pretty sweet deal: Spring and Fall semesters, all my classes were online (which meant I could keep my job as a high school teacher) and for a month during the Summer semester, I fulfilled all of my residency requirements abroad. That summer, I was taking a New Orleans Literature class with Dr. Nancy Dixon (who literally wrote the book on Nola Lit) and a Fantasy and Science Fiction workshop led by the brilliant Jim Grimsley. It was in that workshop where I met Rachel E. Pollock, a good friend of mine who is one of those people who just unfairly brim over with creativity and talent. She’s not just an amazing writer, but she’s also an artist and an artisan who sews costumes for plays and . . . look, she’s awesome, all right?

Anyway, we were talking about what we were writing, and I told her that I had this novel I wanted to rewrite for my thesis, full of deities from all kinds of myths and faiths, among them Papa Legba and Baron Samedi. Rachel, being as awesome as she is, had a friend who practiced voodoo. When I named the different gods I wanted to write about, I saw a flicker of something sly move across my friend’s face. “Oh,” she said, with a fierce, conspiratorial grin, “I’ve got a story about Samedi.”

I have to pause here and tell you something about voodoo that you may not know. The loa don’t manifest physically in our world; they come here as spirits and inhabit the bodies of their devotees. If you are ridden by one of the loa, they aren’t merely inspiring you in a way that you translate and interpret. They’re not along for the ride; they’re in the driver’s seat. They don’t, in short, communicate through you. If they’ve got something to say, they speak with your mouth.
So when Rachel said she had a story about Samedi, she didn’t mean it was something she’d come across in a book. This was not a matter of folklore scholarship. She knew someone who, within the boundaries of her faith, had spoken to Samedi. This was more of a “friend of a friend” situation. Just three degrees of separation between me and the spirit world. For want of time and space I won’t go into the whole narrative, but suffice it to say that the punchline was Samedi promising that he “had the biggest Spock of all the loa.” He uh, he used a word other than the name of a beloved sci-fi character, but I’m trying to keep this PG here.

What made this line equally hilarious and illuminating was that the body he was inhabiting when he said it was female. That told me a whole lot about Samedi. It told me that he was 100 percent, grade A bro, with all the self-aggrandizing, genital-obsessed swagger that went with it. It told me he had a pretty high opinion of himself. It told me that his own reality was more significant to him than the circumstantial factors of his presence in ours. More crucial than just giving me all these insights into his personality, though, was the fact that this line made it explicitly clear to me that he had a distinct personality to begin with.

I’d been thinking about the figures in myth as archetypes, as symbols, perfect abstractions that merely represented some universal fear or yearning or blessing shared by all humanity. That made it difficult to write about them in ways that weren’t stilted or insincere. It’s hard to get Fear of Death to have a meaningful conversation; hard to predict what Filial Piety’s favorite movie might be. To be clear, myths are archetypes and symbols, but that’s not all they are. They’re also characters, with their own flaws and hungers and strengths. Their own friends and foes. Their own voices.

Once I had that voice in my ear (in a manner of speaking) I was able to see the whole character, how he would act and react. Not just how he would dress and the kind of alcohol he would drink, which I knew from the literature that recorded oral traditions, but why he always wore a suit and preferred rum. And that, for me, was the moment when this figure of myth made the shift from an idea into a character. Through these kinds of thoughts, I was able to really imagine the rest of my immortal beings as people, and thus, The City of Lost Fortunes really started to open up and breathe.

All because Baron Samedi couldn’t stop talking about his eggplant emoji.

In 2011, Post-Katrina New Orleans is a place haunted by its history and by the hurricane’s destruction, a place that is hoping to survive the rebuilding of its present long enough to ensure that it has a future. Street magician Jude Dubuisson is likewise burdened by his past and by the consequences of the storm, because he has a secret: the magical ability to find lost things, a gift passed down to him by the father he has never known—a father who just happens to be a god. When the debt Jude owes to a fortune deity gets called in, he finds himself sitting in on a poker game with the gods of New Orleans, who are playing for the heart and soul of the city itself.

Bryan Camp is a graduate of the Clarion West Writer’s Workshop and the University of New Orleans’ Low-Residency MFA program. He started his first novel, The City of Lost Fortunes, in the backseat of his parents’ car as they evacuated for Hurricane Katrina. He has been, at various points in his life: a security guard at a stockcar race track, a printer in a flag factory, an office worker in an oil refinery, and a high school English teacher. He lives in New Orleans with his wife and their three cats, one of whom is named after a superhero. You can find him on Twitter (@bryancamp), Facebook (@BryanCampNovelist), or Instagram (@bryanlcamp81).