Some of the best moments I’ve had while writing have come when a character who was supposed to be a minor spear carrier insists on developing depth and color and an interesting relationship with the protagonist. You can engineer that kind of thing deliberately, of course, but the best ones (in my experience) are the characters who do it organically, without me planning for it, because my subconscious sees an opportunity there. And apparently E.C. Ambrose’s subconscious saw something in Martin Draper . . . 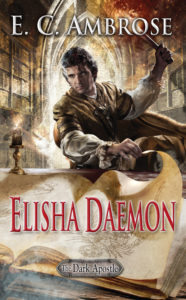 One of the most fun aspects of writing a book is when the characters take on a life of their own. It’s always surprising, and always delightful—though it often requires some re-jiggering later on to incorporate the character’s unexpected actions. When I was writing Elisha Barber, the first volume in the Dark Apostle series which ends with my new release, Elisha Daemon, meeting Elisha’s best friend was one of those moments.

Elisha, the protagonist of the series, is a barber-surgeon in 14th century London: cutting hair, pulling teeth, performing blood-letting, and other minor operations. In the first scene of the book, Elisha is shaving a man’s beard when Elisha’s brother barges in to call Elisha to a childbirth. The client, a wealthy cloth merchant, protests this departure, calling the brother’s pregnant wife a whore. Infuriated, Elisha insults his client, realizing he’ll have to apologize later. Their exchange made it clear that they knew each other well: in fact, that Elisha knew his client was gay. Apparently, this guy had hit on Elisha in the past, but they retained their working relationship in spite of Elisha’s rejection. Elisha had not denounced or blackmailed his client, which told me a lot about Elisha and his attitudes. Interesting.

Then, in chapter four, things got very interesting. Elisha’s sister-in-law has lost the baby, Elisha’s brother has lost his life. Elisha kneels in their bloody house, trying, literally, to pick up the pieces when Martin shows up, and Elisha immediately calls him by name—crossing several levels of the social hierarchy. It’s one thing for a lowly barber to maintain a polite relationship with a wealthy patron whom he knows to be gay, and another thing entirely for the man to show up at his house—to even know where he lives. In spite of his terrible day, Elisha apologizes to Martin. Martin’s warm, sympathetic reaction placed their relationship in a whole new light.

Martin gives him a gift, a scrap of cloth, that proves to be useful in more ways than one later on. I was writing this book by the seat of my pants—no outline, just a few notecards—so I often had to do a mental inventory to see what tools or clues I had left for myself to get through a given scene. Martin’s gift was one of these, a small, apparently worthless item that adds meaning throughout not only this book, but also the succeeding volumes. An unexpected character can be like that: a gift you don’t know you’ve been given until they make their power known.

In this fifth and final installment of The Dark Apostle, barber-surgeon-turned-sorcerer Elisha must save plague-stricken England from its path of destruction–or risk succumbing to the very dark magic he is trying to eradicate.

Elisha was once a lowly barber-surgeon from the poorest streets of 14th-century London; now, he may be the most powerful magus alive. He faces the necromancers, a shadowy cult of magi who draw their power from fear and murder–and who have just unleashed the greatest plague the world has ever known upon a continent already destabilized by wars, assassinations, and religious conflict.

Empires and armies are helpless with no clear enemy to fight. The Church loses its hold upon the faithful as prayers go unanswered. Europe has become a bottomless well of terror and death, from which the necromancers drink deep as the citizens sink into despair. Elisha knows that if there is to be any chance of survival, he must root out the truth of the pestilence at its unexpected source: the great medical school at Salerno. There, Elisha might uncover the knowledge to heal his world.

But as he does, his former mentor, the beautiful witch Brigit, lays her own plans. For there may be one thing upon the face of the planet deadlier than the plague: the unfiltered power of Death within Elisha himself.