Sometimes your story turns out not to need an Evil Villain or Menacing Threat with capital letters. Sometimes all it needs is the everyday arrogance and callousness of ordinary people — as Harry Connolly is here to describe. 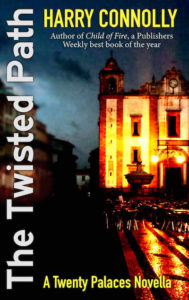 The Twisted Path, the new novella in my Twenty Palaces series, has been simmering on the back burner for a long time. I wrote my first notes on the story in early 2011, months before Circle of Enemies, the third entry in the series, was released.

But from almost the beginning, it was going nowhere. I knew what I wanted the predator to be (in the Twenty Palaces stories, the supernatural entities aren’t good or evil; they’re just links in the food chain). And I knew, vaguely, where it would take place (Lisbon) and what shape the plot would take. And I knew, in a general way, that I needed a human villain that was linked to the predator.

But it was dead on the page.

It wasn’t until I actually went to Lisbon that the story really began to take shape.

First of all, engagement with the culture (which Google Maps could never have provided) gave me a thematic foundation. But the real spark for this story happened on our first full day in the country.

My sister-in-law arranged for us to take a tour of Lisbon via tuk-tuk, and our driver was the first Portuguese person I met. His English was excellent (having lived for several years in Colorado) and he was exceedingly outgoing, cheerful, knowledgeable, and welcoming.

But he was weird, too. He kept pointing out expensive cars on the street and never tired of saying “Look! A Porsche!” And while we wanted to see things that were old and beautiful—historic Lisbon, basically—he kept driving past shopping centers to show us where we could buy nice jackets or shoes or whatever.

He only dropped his affable outgoing manner once, when he parked in a spot beside the castle that was clearly marked as a no-parking zone, and a cop told him he had move. His smile vanished, and as he drove away, he complained bitterly in Portuguese and English for several blocks. How dare that cop tell him not to park in a no-parking zone! Who did he think he was? And so on. The guy was furious.

Later, he drove down to the waterfront and made us all climb out of the vehicle to watch a cruise ship pull out of the dock. That was it. A cruise ship. We stood in the parking lot of some random restaurant while he stared up at that great lumbering thing for about ten minutes. Honestly, I had no idea what he was thinking, or even if he was thinking at all.

Later, over lunch, he tried to make a case for Portuguese colonialism, insisting it was actually not that bad because his people were only interested in trade and fucking the natives. Except he used a different n-word in place of “natives”.

If I had realized my sister-in-law had found and hired him over Facebook, at this point I would have stepped in to say something like “Dude. Enough.” But I didn’t. I honestly couldn’t figure out his relationship to our hosts. They couldn’t be strangers, could they? Not if he’s going to be this friendly. And if they knew each other, and I said something to him (something that would have been more harsh than “Don’t park there”) how would that blow back on them?

Instead, I shrugged it off, and had a talk with my son about it later.

Maybe I should have realized right away that he was the perfect for the human villain in The Twisted Path, but it took an embarrassingly long time to make the connection. I almost never “cast” real people as the characters in my fiction, but in this case I had to. This friendly, toxic, weird and shallow guy made a perfect foil for blunt, self-conscious Ray Lilly. And once I had him in place, I realized I didn’t need that original predator at all. My oddball tour guide pushed it right out of the story.

And with any luck, he’ll never find out. I have no idea if he’d respond like the friendly, smiling tour guide or the furious, bitter, ranting guy who couldn’t believe that someone had actually told him no, and I’d rather not find out.

Ray Lilly has been summoned to the headquarters of the Twenty Palace Society to answer one question: How has he managed to survive mission after mission fighting alongside his boss, Annalise? He doesn’t have the power of a full peer of the society. He’s a wooden man. An assistant. A diversion. The other peers want to know what’s going on, so it’s off to Europe for a trip to the First Palace. And no place in the world is safer than inside the headquarters of the Twenty Palace Society, right?

Child of Fire, Harry Connolly’s debut novel and the first in The Twenty Palaces series, was named to Publishers Weekly’s Best 100 Novels of 2009. Both sequels, Game of Cages and Circle of Enemies, received starred reviews. He has also self-published a Twenty Palaces prequel titled, cleverly, Twenty Palaces.

In 2013, his Kickstarter for his Great Way trilogy was, at the time, the ninth-most funded campaign in the fiction category. The first book in that trilogy has gone on to sell over 13,000 copies.

Harry lives in Seattle with his beloved wife, his beloved son, and his beloved library system. You can find out more about him and his other books at harryjconnolly.com.