Writers joke about how there’s inspiration in shower water, but it’s true — backed-up-by-neuroscience true — that you’re often most primed to solve creative problems when you aren’t thinking about them. Washing dishes, driving somewhere, anything where you’re operating half by reflex, leaving the rest of your mind free to wander. So let’s let Jaine Fenn tell us about how going to a music festival solved her heist problem for her! 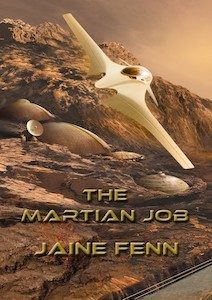 It started with a misquote…

Writers can be lazy creatures. It’s not that we don’t work hard when we have to but if we can find a way to make our difficult jobs a little easier, we’ll probably take it. So, when Newcon Press approached me to commission a novella, with the only stricture being that it had to be set on Mars, I had an idea which — I thought — would be an easy ride, as well as indulging my love of heist movies. I would take a classic heist story, and retell it on Mars, with added SF elements.

The movie in question was the British 60s classic, The Italian Job (not the remake; we don’t talk about the remake). My memory of the film was a bit hazy so I started out by re-watching it. Turns out, the plot would appal any Hollywood screenwriter today. The protagonist and his crew have it all their own way until the very end, when they don’t; everything’s going swimmingly then someone screws up for no good reason — worse, the film ends before this unexpected and un-foreshadowed twist is resolved. Hmm. So much for ripping the plot off wholesale.

So, what could I use? Obviously there had to be a car chase, for some value of ‘car’. And I needed to riff off the film’s most famous line. For anyone not familiar with it, this occurs when Michael Caine’s character is overseeing a practice run by his explosives expert. Said expert uses a bit too much bang-bang, and the car they were practising on gets blown to pieces, at which point Caine’s character pipes up, ‘You’re only supposed to blow the bloody doors off!’ I decided that the SF version of this would be, ‘You’re only supposed to blow the outer airlock!’

And that, for some weeks, was all I had: a concept and a misquote. My protagonist, Lizzie, was taking up residence in my subconscious, but structure-wise I could not see how to make the story work. After I realised I wasn’t getting anywhere I decided to focus on the end, because I reckoned that’s where the original falls down.

The break came at a music festival, while I was having fun with friends and not consciously considering the problem. That’s another thing about writers — about most creatives in fact: sometimes the best way to solve a problem with your current project is to do something completely different. I came up with a final line which was a nod to what happened at the end of the film but, I felt, did actually resolve the situation. It ended up as the semi-penultimate line, and as it’s kind of a spoiler you’ll have to read the book to find out what it is.

Having finally pinned down my almost-final line unlocked the story for me. Lizzie Choi stopped being a fuzzy concept with a potentially interesting background and interesting foible (has a criminal family she’s trying to forget; fond of meaningless sex) and started to become a real person, the kind of person who would speak that penultimate line. I could even hear her, and when you start hearing your characters, it’s time to get down to work.

It would be an overstatement to say ‘The Martian Job’ wrote itself from there. But it was one of the easiest-to-write stories I’ve ever worked on. Hung on the scaffolding of a first line I’ve always wanted to use (‘If you’re listening to this, I’m dead’) with that misquote around halfway through and knowing what my closing lines were I could then build my story. It was almost as though I let Lizzie Choi do her stuff, then just sat back and watched.

I’m pretty happy with the result, and I’m not the only one: since coming out in December from Newcon, ‘The Martian Job’ has sold, as a reprint, to two other markets, and has appeared in Locus’s Recommended Reading List. Well done, Lizzie.

When Lizzie Choi receives a message from her brother telling her that he’s dead, she assumes it’s a joke. Lizzie, an employee of the powerful Everlight Corporation, already has to live under the cloud of her mother’s misdemeanours and could do without her brother, Shiv, adding further complications.

By the time she realises that this is no joke and comes to understand what is being demanded of her, she knows she’s in trouble. The last thing she wants to do is travel to Mars and take Shiv’s place in a criminal undertaking, especially one of such magnitude and danger, but…

Jaine Fenn is the author of the Hidden Empire space opera series, published in the UK by Gollancz, as well as numerous short stories, one of which won the 2016 British Science Fiction Association Shorter Fiction Award. She also writes for the video-games industry, working on games including Halo and Total War. Whilst she likes the idea of going to Mars, when it came to it she would probably chicken out.

You can find her on twitter as @JaineFenn, or support her on Patreon for unique access to audio recordings of her fiction at www.patreon.com/jainefenn.