When I decided to title this blog series “Spark of Life,” I didn’t expect that the moments where the characters and stories came to life would involve literal sparks. But in the case of Joshua Palmatier’s novel The Skewed Throne (the first book in The Throne of Amenkor omnibus), it really was the White Fire that brought things to live — or rather, his heroine’s response to it. 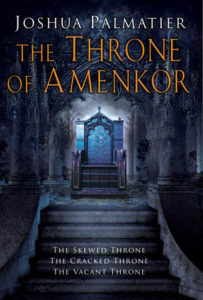 The “Throne of Amenkor” series—my first published trilogy—has a special place in my heart. The obvious reason is because THE SKEWED THRONE, the first book in the series, was the first novel I ever sold. But more importantly, it was because of its main character, Varis. In essence, she is the entire series. So I thought I’d talk about how and when Varis “came to life” for me.

The idea for the novel came from two sources: First, while writing another novel (unpublished), I had to will an ancient museum with interesting artifacts, and one of those artifacts was a throne that appeared warped in some way and those who approached it heard voices; this became the Skewed Throne. Second, I had an incredibly strong visual in my head of a young girl on the rooftops of a city, staring out over a harbor, with a wall of white fire approaching from across the ocean, stretching across the horizon. This became the White Fire, and was the catalyst for the story.

The woman in the visual was Varis, of course, but she hadn’t come to life yet. There was no spark at that point. Both of those images were static. The spark that brought her to life came almost immediately when I sat down to start writing. I began with the typical “portentous prologue” that seemed to be at the beginning of all fantasy novels in the 80s. The White Fire seemed perfect for this, after all. It was monumental in scope, affected everyone, would change the culture of the world. Perfect for a portentous prologue. So that’s where I began.

But then a magical thing happened. After a few paragraphs of this portentous prologue, that ponderous, powerful voice that everyone hears when reading such prologues got interrupted. By Varis herself. She cuts into it with a scathing remark. The interruption is jarring, and with a single line—“Fire, my ass”—you get an instant characterization of Varis herself. The contempt and self-reliance that comes across with those few words is what suddenly and immediately brought the entire book—what would become a trilogy—to life for me. The moment I typed those words, I drew in a sharp breath, because I knew that this character that I had yet to become familiar with had a life and depth that I would want to explore. She was going to be a powerful character, one that could sustain a series, someone who was strong and resilient and yet who had hidden hopes and vulnerabilities.

That moment was when the character—and thus the story—took life for me. Varis bloomed in my head, and while the plot centered around the White Fire and the Skewed Throne, that plot would have been empty and meaningless without the voice of Varis to tell it. That is how all of my novels get written: when a character or characters suddenly speaks and comes to life inside my head. It’s always about the character.

The Throne of Amenkor Trilogy omnibus brings together The Skewed Throne, The Cracked Throne, and The Vacant Throne for the first time.

One young girl holds the fate of a city in her hands. If she fails, it spells her doom—and the end of her world.

Twice in the history of the city of Amenkor, the White Fire had swept over the land. Over a thousand years ago it came from the east, covering the entire city, touching everyone, leaving them unburned—but bringing madness in its wake, a madness that only ended with the death of the ruling Mistress of the city.

Five years ago the Fire came again, and Amenkor has been spiraling into ruin ever since. The city’s only hope rests in the hands of a young girl, Varis, who has taught herself the art of survival and has been trained in the ways of the assassin. Venturing deep into the heart of Amenkor, Varis will face her harshest challenges and greatest opportunities. And it is here that she will either find her destiny—or meet her doom.

A professor of mathematics at SUNY College at Oneonta, Joshua Palmatier has published nine novels to date—the “Throne of Amenkor” series (The Skewed Throne, The Cracked Throne, The Vacant Throne), the “Well of Sorrows” series (Well of Sorrows, Leaves of Flame, Breath of Heaven), and the “Ley” series (Shattering the Ley, Threading the Needle, Reaping the Aurora). He is currently hard at work on the start of a new series, as yet untitled. He has also published numerous short stories and has edited numerous anthologies. He is the founder/owner of a small press called Zombies Need Brains LLC, which focuses on producing SF&F themed anthologies, the most recent being Submerged, The Death of All Things, and All Hail Our Robot Conquerors!. Find out more at www.joshuapalmatier.com or at www.zombiesneedbrains.com. You can also find him on Facebook under Joshua B. Palmatier and Zombies Need Brains, and on Twitter at @bentateauthor and @ZNBLLC.