I’ve gotten several compliments on the cover art for Maps to Nowhere, and wanted to take a moment to talk about it. 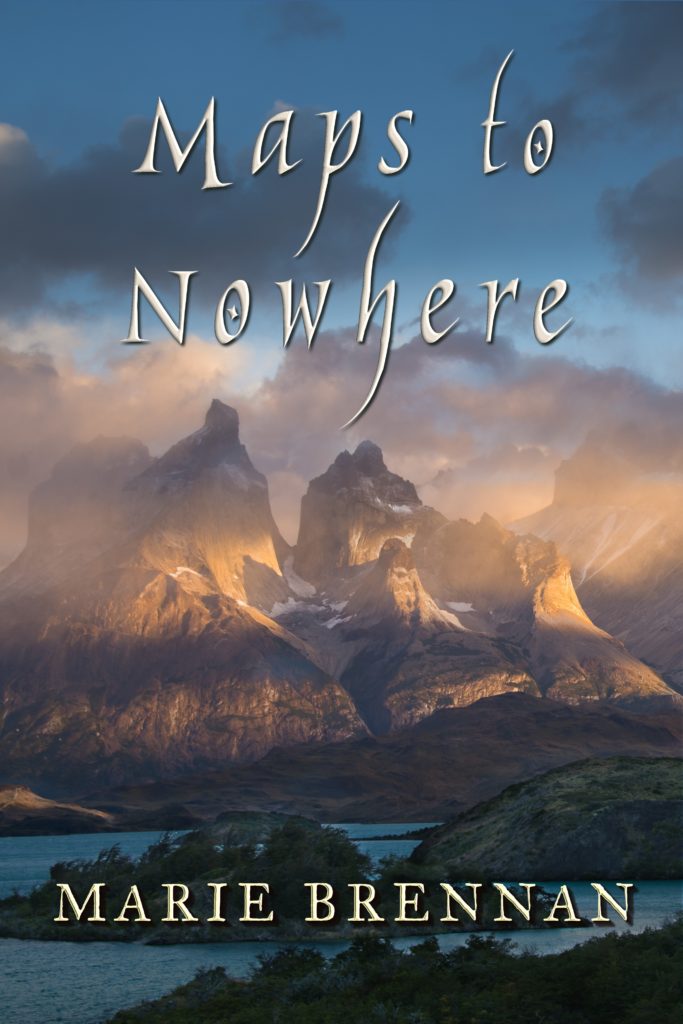 For me, the cover is the hardest and most expensive part of doing an ebook. Because I’m a member of Book View Cafe, I work with a bunch of people who know how to do things like format them (Chris Dolley regularly does mine). And we have cover designers, of course; my own covers have been the product of efforts by Leah Cutter, Pati Nagle, and Amy Sterling Casil.

But that’s cover design. That’s figuring out how to stick the title and my byline on an image in a way that will be readable and attractive — and I’m very grateful for their help, because my image editing skills are all oriented toward photo processing, not drop shadows and embossing and knowing my way around eight million fonts. Before we get to that point, though, I have to answer another question: what do I want the cover to look like?

BVC can help with that, too, suggesting ideas based on the subject matter of the book or hunting through stock photo signs and DeviantArt to find possibilities. In the end, though, I’m the only one who can really say “yeah, that’s what I want” — which in practice means that I wind up doing most of the brainstorming and hunting myself, because I don’t feel like it’s fair to make someone else suffer through my “ehhh, uhhhh, maybe, I dunno” indecision. And depending on where you get the image from, licensing it will cost a sum of money ranging from a pittance to quite a bit; commissioning art is definitely on the “quite a bit” end. So: hardest and most expensive part of the ebook.

Which is why I’ve started casting a speculative eye toward my own photos. God knows I take enough of them; and while many aren’t suitable for covers (wrong orientation, too much noise, taken somewhere that doesn’t permit commercial use, etc) or the book itself is something that doesn’t lend itself to photographic representation (the Wilders books, frex), I’ve managed a few. In London’s Shadow uses a detail I shot of the clock on the Rathaus in Basel, Switzerland; the upcoming Ars Historica collection will use another image from that trip, a closeup of an inscription in a church. Dice Tales is built from a die photo I took specifically for the book, which Leah Cutter then photoshopped to change the top four faces, and a block of text I put together for the background, because it was that or staging the equivalent of the Writing Fight Scenes cover with some dice in place of the sword.

But for Maps to Nowhere?

I didn’t have any particularly good map photos, because those are almost always taken for reference purposes, not aesthetic ones. I knew I wanted something that would suggest another world, and you’d think I would have that . . . but most of my travel, especially since I got any good at photography, has been to cities. Gardens I can do, but actual natural landscapes? Not so much. I assembled a handful of possibilities — three of which are are variants on the mossy slope that forms the backdrop of my website — but none of them clicked.

So I called up my parents.

They’re the ones who got me into photography, because they got into it before I did, and are better than I am on many fronts. And they travel a lot, including to lots of spectacular natural places. I explained what I wanted and why; they gave me a pile of photos; and that easily, I had my cover. One of my father’s favorite shots from their trip to South America a few years ago is of a place called Torres del Paine in Patagonia, where he had caught the warm light of sunrise on the Paine Massif, with mist blurring the mountains and the sky and water bracketing it all in cool blue. It’s striking, it’s otherworldly, and it’s exactly what I wanted.

I owe Pati Nagle thanks for turning the photograph into a cover, Chris Dolley for the formatting, and Phyllis Irene Radford for proofreading the collection. Vonda McIntyre and others checked the formatting, and the entire BVC co-op stays vertical and functioning because its members put in quite a bit of hard work to make that happen. But this time I have to add my father to the list, because if that cover makes you feel like you’re about to go somewhere magical, it’s because he caught that moment with his camera, and let me share it with you.