I absolutely know what Stephanie Burgis means about those openings that hook you. Lady Trent did the same thing, complete with me letting the opening sit around for years before I figured out where I was going with it. And fans of Lady Trent or Mary Robinette Kowal’s Glamourist Histories will find a lot to like in the setting of Snowspelled . . . 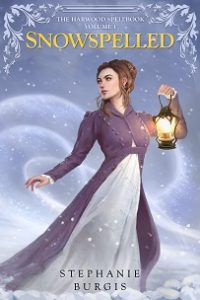 I was in bed, already half-asleep, way back in 2015 when the opening of Snowspelled first presented itself in my head: a woman’s authoritative voice, unfurling with utter clarity as she looked back at the beginning of her story.

Of course, a sensible woman would never have accepted the invitation in the first place.

To attend a week-long house party filled with bickering gentleman magicians, ruthlessly cutthroat lady politicians, and worst of all, my own infuriating ex-fiancé? Scarcely two months after I had scandalized all of our most intimate friends by jilting him?

Utter madness. And anyone would have seen that immediately … except for my incurably romantic sister-in-law.

Cassandra Harwood had arrived in my heart from that moment, and I loved her immediately. I jerked upright, scribbled that brief opening down…and then spent the next year and a half trying to figure out how to continue it.

Did I want to set Cassandra’s story in historical England (it had a Regency feel to me) or in a completely different, high-fantasy setting?

What was her relationship with her incurably romantic sister-in-law, the one who was going to push her into accepting that impossible invitation?

Why had she jilted her ex-fiancé in the first place?

And what would go magically wrong once she was snowed in along with him?

I wrote opening after opening, trying to answer those questions…and I discarded every single new attempt as, one after another, they failed with a thud.

None of them felt right. None of them were fun. And I knew from the first moment that this story should be full of sparkling fun, both for me as a writer and for my readers, too.

I knew fairly soon that my heroine had lost something irretrievable, something that defined her, and that loss had led to her breaking off her engagement. At first, I thought maybe she’d lost her health. Then I realized she’d lost her own magic, although I didn’t yet know how…and wait a minute: hadn’t I written, in that first paragraph, that it was gentlemen who had magic in this society, not ladies? (The ladies, in their turn, managed the practical business of politics.)

In one draft, Cassandra couldn’t stand her dull, foolish sister-in-law even though she was forced to feel grateful to her. Oops. That draft didn’t work for me at all.

I gnashed my teeth. I set that opening aside, again and again. I despaired over ever finding my way inside the story – but oh, I really loved that opening! I loved Cassandra’s voice. I really didn’t want to give up on her completely…

It really helped when I finally figured out in the autumn of 2016 that she actually adored her sister-in-law, Amy, who is pretty, loyal and sweet – and ruthlessly intelligent, practical and manipulative, too. That dynamic – the push-and-pull between two fiercely smart and powerful women who love each other dearly but want vastly different things to happen – got me through the rest of that first family scene…

…And then (we’re up to November, 2016 now), as I felt my way cautiously forward, one slow paragraph at a time, their carriage rattled through the wintry dales of Angland (an alternate-history version of England, in which Boudicca kicked out the Romans long ago), Cassandra looked out the window, saw a troll standing outside in the falling snow…

…and CLICK! I suddenly had it: the plot, the mood, and the full setting – the elven dales, in which humans (ruled by a group of women known collectively as the Boudiccate) coexist warily with elves, and looming trolls guard the toll-roads for their elven masters. It was all suddenly real and tangible in my head…and I could not stop writing it from then onward!

I raced through the rest of the chapter in a rush of joy. I wrote the full novella (or maybe short novel – I’ve never been certain of which to call it!) powered by that joy and sheer sense of fun. Snowspelled was my comfort-/escape-writing project exactly when I needed it most, right after the 2017 election. It’s filled with romance, magic, danger, interfering family members, hilariously awful weather wizards, mentorship between generations, and deep love of more than one type.

It felt like it had taken me forever to figure out my real story from that brief opening…but the spark of life, for me, came at just the right time.

I hope you guys enjoy it too!

In nineteenth-century Angland, magic is reserved for gentlemen while ladies attend to the more practical business of politics. But Cassandra Harwood has never followed the rules…

Four months ago, Cassandra Harwood was the first woman magician in Angland, and she was betrothed to the brilliant, intense love of her life.

Now Cassandra is trapped in a snowbound house party deep in the elven dales, surrounded by bickering gentleman magicians, manipulative lady politicians, her own interfering family members, and, worst of all, her infuriatingly stubborn ex-fiancé, who refuses to understand that she’s given him up for his own good.

But the greatest danger of all lies outside the manor in the falling snow, where a powerful and malevolent elf-lord lurks…and Cassandra lost all of her own magic four months ago.

To save herself, Cassandra will have to discover exactly what inner powers she still possesses – and risk everything to win a new kind of happiness.

Stephanie Burgis grew up in East Lansing, Michigan, but now lives in Wales, surrounded by castles and coffee shops, along with her husband (fellow writer Patrick Samphire), their two children, and their very vocal tabby cat. Her first historical fantasy novel for adults, Masks and Shadows, was included in the Locus Recommended Reading List 2016, and her latest MG fantasy novel, The Dragon with a Chocolate Heart, was chosen as a Kids’ Indie Next Pick and an Amazon Best Book of the Month. To find out more or read Chapter One of Snowspelled, please visit her website: www.stephanieburgis.com.