As a fellow organic writer, I am totally there with Joshua Palmatier about needing these sparks of life to power a book to its ending. (There’s a reason I chose that concept for my guest blog series.) And if some of those sparks occasionally involve being a total sadist to one of your characters . . . well. It happens. 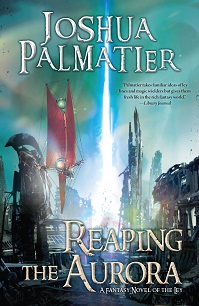 The idea behind this blog series—Spark of Life—is particularly appropriate for me, because a novel will not work for me UNLESS there is some particular “spark” with the characters at some point during the writing process. I’m an “organic” writer, or a writer that works by the seat of their pants rather than an outline or synopsis, and so if there isn’t some kind of spark somewhere along the way, I’m never going to finish the novel. It won’t have any life, which means I won’t be interested in writing it, which means it will never get finished.

For Reaping the Aurora, there were many, many sparks. Some of them happened in earlier novels—this is the third and final in the series, so the characters had to come to life earlier—but the spark I want to talk about today relates to a character, Cory, who I didn’t think had a major role to play in the final scenes. He’s been there since the beginning, and had his moments in earlier novels, but it didn’t seem like he had anything to contribute to this ending. The “spark” was when I realized that I couldn’t have been more wrong.

It happened at the major turning point in the novel, basically when everything utterly and completely falls apart and the direction of the novel takes a sudden and sharp hairpin turn. I knew what the majority of the characters were going to do at this point—Kara, Allan, Marcus, Hernande, etc. But leading up to this point, I didn’t have anything in mind for Cory. I just assumed that he would be joining one of the groups and help them tie the final threads of the novel together. But that didn’t happen. During the course of the action, everything falling apart around them, shockingly, Cory gets captured by the Kormanley, the group they’ve been fighting since the first book. No one knows what happened, and so no one realizes they need to rescue him. And because he’s a mage, with powers that are feared, he isn’t simply thrown into a cell. He’s drugged and left mostly unconscious.

All of this was unexpected. All of it happened in the course of writing one chapter. But suddenly, Cory’s plotline awakened and exploded inside my head. How was he going to survive? He can’t plan an escape—he’s unconscious and paralyzed most of the time. And he can’t be rescued—no one knows where he is or that he’s even in trouble. His plight—because of the stakes involved and because it is so personal—suddenly took on a vibrancy and reality that the other known plotlines didn’t have. In my head, Cory had become the most interesting character in the book. Why? Not because his plight tied itself significantly to the final outcome of the novel. No. It was because I had no foreknowledge of his plotline at all.

Those are the surprises that keep me writing, that tell me the book I’m working on is actually working, that bring the words and the worlds I create to life. Those sparks make the job of putting words to paper mesmerizing.

The final book in the thrilling epic fantasy Ley trilogy, set in a sprawling city of light and magic fueled by a ley line network.

In a world torn apart by the shattering of the magical ley lines that formerly powered all the cities and towns of the Baronies, there are few havens left for the survivors. The uncontrolled distortions released by the shattering have claimed the main cities of the Baronial Plains. And many of the Wielders who controlled the ley died in the apocalyptic cataclysm their manipulation of the ley created.

Wielder Kara Tremain and former Dog Allan Garrett, survivors of the city of Erenthrall’s destruction, have seized control of the new Nexus created at the distant temple known as the Needle, the stronghold of the White Cloaks and their leader, Father Dalton.  With Father Dalton a prisoner, Kara intends to use the Needle’s Nexus to heal the major distortions that threaten to shake their entire world apart.

But while she and the remaining Wielders managed to stabilize Erenthrall, they have not been able to stop the auroral storms or the devastating earthquakes sweeping across the lands. Now they are hoping to find a means to heal the distortion at the city of  Tumbor, releasing the nodes captured inside.  If they succeed, the ley network should be able to stabilize itself.

But the distortion over Tumbor is huge, ten times the size of the one over Erenthrall.  Kara will need the help of all of the Wielders at the Needle in order to generate enough power, including the rebel White Cloaks.  But can Kara trust them to help her, or will the White Cloaks betray her in order to free Father Dalton and regain control of the Needle, possibly destroying any chance of healing the ley network in the process?

Meanwhile, Allan journeys back to Erenthrall, hoping to form alliances with some of the survivors, only to discover that Erenthrall itself has sunk a thousand feet into the ground.  The vicious groups that plagued them on their last visit have banded together under a new leader—Devin, formerly Baron Aurek’s second-in-command.  While discussing an alliance with the Temerite enclave, Devin’s men attack, forcing Allan and the Temerites to flee back to the Needle, leaving Erenthrall in Devin’s hands.

But the Needle is no safe haven.  Father Dalton’s followers have begun to rebel, starting riots and creating unrest, all of it targeted at Kara and the Wielders.  The tensions escalate beyond control when Father Dalton declares he’s had a vision—a vision in which the Needle is attacked from the north by dogs and from the south by snakes; a vision that ends with the quickening of the distortions called the Three Sisters to the north . . . and the annihilation of reality itself!

A professor of mathematics at SUNY College at Oneonta, Joshua Palmatier has published nine novels to date—the “Throne of Amenkor” series (The Skewed Throne, The Cracked Throne, The Vacant Throne), the “Well of Sorrows” series (Well of Sorrows, Leaves of Flame, Breath of Heaven), and the “Ley” series (Shattering the Ley, Threading the Needle, Reaping the Aurora). He is currently hard at work on the start of a new series, as yet untitled. He has also published numerous short stories and has edited numerous anthologies. He is the founder/owner of a new small press called Zombies Need Brains LLC, which focuses on producing SF&F themed anthologies, the most recent being Alien Artifacts and Were-. Find out more at www.joshuapalmatier.com or at www.zombiesneedbrains.com. You can also find him on Facebook under Joshua B. Palmatier and Zombies Need Brains, and on Twitter at @bentateauthor and @ZNBLLC.