I had the pleasure of meeting Michael F. Haspil at Denver Comic-Con recently, and he had me at the word “Egyptology.” The hero of his debut novel is a mummy and former pharaoh — how could I not be interested in that! But I’ll let Michael tell you about how it took a different character to bring his mummy’s story to, er, life for him. 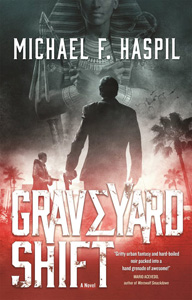 I wrote the original version of GRAVEYARD SHIFT during NaNoWriMo some time ago. However, I still remember when the story really jumped into gear and, regrettably, that wasn’t truly in the first draft, though at the time I thought it was.

As I began revisions and sorted through the aftermath of a NaNo first draft, certain aspects stood out as being decent. The main character, Alex Menkaure, an immortal pharaoh now working in a special supernatural police unit in modern-day Miami, and his partner, Marcus, a vampire born in ancient Rome, needed minor work. The climactic battle at the end against the villains needed a lot of polish. While the action was solid, I wrote the section in a blur and it showed. Also, there was something missing. While Alex and Marcus are formidable, the villains I’d set up for them to go against were more so, and they needed help.

The help came in the form of Rhuna Gallier, a young but vicious shapeshifter with her own agenda. I’d had an idea for her character while brainstorming another novel, but realized with some minor tweaks, Rhuna and “The Pack” could fit into GRAVEYARD SHIFT’s story and world.

When I wrote the next draft, as I seeded Rhuna’s presence throughout the book, she threatened to take over the entire thing and make it hers. This may sound weird to non-writers, but she didn’t seem to understand this was Alex’s story and she was a supporting character. So I promised her besides the climax she would get a cool action scene. I knew in the scene Rhuna needed to be mostly on her own with minimal support so I could showcase her lethality.

In GRAVEYARD SHIFT’s world, a practice goes by the underground name of S&B. It stands for Sangers, a derogatory name for vampires, and Bleeders, humans who willingly let vampires feed on them to experience the pleasurable sensations that come with it. Participants meet in bloodclubs, which are akin to prohibition-era speakeasies. Many unsavory activities such as human trafficking, blood and drug dealing, and murder, happen near the clubs and they are part of Miami’s criminal underbelly.

In the early draft, I had a criminal vampire who liked to prey on young girls, take one of his victims to the club. It was an unhappy chapter and ended with the vampire killing another victim. In the new draft, Rhuna showed up. That’s when the story jumped to life. Rhuna took the place of the victim and suddenly where I had a naïve girl falling prey to an old vampire’s wiles, now I had Rhuna going in as a Trojan horse and the vampire and his companions never knew what hit them.

I rewrote the sequence, several chapters long, in one sitting. Now, I can’t wait to write Rhuna’s novel. It’s going to be great fun.

Alex Menkaure, former pharaoh and mummy, and his vampire partner, Marcus, born in ancient Rome, are vice cops in a special Miami police unit. They fight to keep the streets safe from criminal vampires, shape-shifters, bootleg blood-dealers, and anti-vampire vigilantes.

When poisoned artificial blood drives vampires to murder, the city threatens to tear itself apart. Only an unlikely alliance with former opponents can give Alex and Marcus a fighting chance against an ancient vampire conspiracy.

If they succeed, they’ll be pariahs, hunted by everyone. If they fail, the result will be a race-war bloodier than any the world has ever seen.

Michael F. Haspil is a geeky engineer and nerdy artist. The art of storytelling called to him from a young age and he has plied his craft over many years and through diverse media. He has written original stories for as long as he can remember and has dabbled in many genres. However, Science Fiction, Fantasy, and Horror have whispered directly to his soul. An avid gamer, he serves as a panelist on the popular “The Long War” webcasts and podcasts, which specializes in Warhammer 40,000 strategy, tactics, and stories. Graveyard Shift is his first novel. Find him online at michaelhaspil.com or @michaelhaspil.

One Response to “SPARK OF LIFE: Michael F. Haspil on GRAVEYARD SHIFT”