How often is the thing that brings a story to life a question of grammar? And yet, I know exactly what Linda Nagata means. Here she is, explaining how verb tenses turned out to be the key: 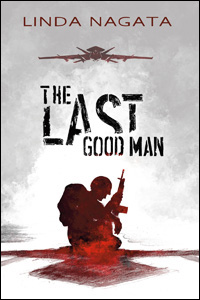 If there ever was one bright spark, one bit of insight, one unexpected plot twist that brought The Last Good Man to life, I don’t remember it. What I do remember was how flat and uninteresting the manuscript felt to me in the earliest days.

This wasn’t an unusual situation for me. Beginnings are hard and it can take time to work out a tone and style that feels right. So I kept pushing forward, telling myself that if I kept going, the essential spark that every novel needs would eventually ignite.

It didn’t happen. Not for over 30,000 hard-fought words. Sure, the story was advancing but I wasn’t happy with the tone or with the way it was being told—and I didn’t know why.

I’d done my preliminary work—a lot of preliminary work. I’d been tossing ideas into the literary stew pot for months, revising my synopsis again and again. This was a very near-future story centered on a small private military company—contract soldiers of the sort hired by corporations, NGOs, and the US government. These were “white hat” mercenaries, choosy about their clients, working only for the good guys, and though they were a small force, that force was amplified by the autonomous robotic weaponry they could deploy. And I had an unusual protagonist in True Brighton.

Middle-aged women are not generally considered cool enough to serve as the lead in a techno-thriller, but I wanted to give it a shot—I wanted the challenge—so I made True forty-nine years old, a retired US Army veteran and mother of three who is still fit, strong, and agile enough to qualify for field missions.

All the pieces seemed right. For months I’d sensed the potential in this story, but still somehow the spark was missing.

Present tense is commonly used with first person, where the narrator relates the story using “I” or “we.” I’d done a whole trilogy in first-person present. But I’d never written in third-person present. Inspired by the novel I was reading, I decided to try it.

And I liked the energy of it! It was just a technical change, but at last the tone of the story felt right. I continued to move ahead, writing additional pages every day in present tense, and at the end of the day I would revise my past work, gradually shifting it from past tense to present, adding detail as I did.

I was far, far happier with the feel of the story. The change in tense had given it the spark it needed—or maybe it had given me the spark I needed. Whichever it was, I never considered shifting back.

Scarred by war. In pursuit of truth.

Army veteran True Brighton left the service when the development of robotic helicopters made her training as a pilot obsolete. Now she works at Requisite Operations, a private military company established by friend and former Special Ops soldier Lincoln Han. ReqOp has embraced the new technologies. Robotics, big data, and artificial intelligence are all tools used to augment the skills of veteran warfighters-for-hire. But the tragedy of war is still measured in human casualties, and when True makes a chance discovery during a rescue mission, old wounds are ripped open. She’s left questioning what she knows of the past, and resolves to pursue the truth, whatever the cost.

Linda is a Nebula and Locus-award-winning writer, best known for her high-tech science fiction, including the Red trilogy, a series of near-future military thrillers. The first book in the trilogy, The Red: First Light, was a Nebula and John W. Campbell Memorial-award finalist, and named as a Publishers Weekly Best Book of 2015. Her short fiction has appeared in Analog, Asimov’s, The Magazine of Fantasy & Science Fiction, Lightspeed, Nightmare, and several anthologies.

Linda has lived most of her life in Hawaii, where she’s been a writer, a mom, a programmer of database-driven websites, and an independent publisher. She lives with her husband in their long-time home on the island of Maui.