When we bought our house last year, the property included one Meyer lemon tree, two apple trees (producing four kinds of apple between them, because grafts), and something we dubbed the Charlie Brown Cherry Tree.

Remember the Christmas tree in the Charlie Brown holiday special? Yeah. It was like that. Shorter than I am, spindly, rather lacking in leaves, and though we can’t remember how many cherries it produced, the number was small enough to be counted on one hand. I don’t have any pictures of it, but you get the idea.

This past winter, we finally got an abundance of rain. Also, our neighbors trimmed back a tree on their property that had been overshadowing the cherry.

Here’s one branch of the tree. Note how there are more cherries on this single branch than the entire tree produced last year.

Here’s a shot of the most abundant section when it was really starting to gather steam: 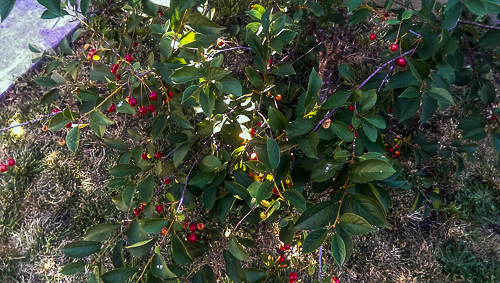 And here’s the near-final tally; there are still a few more cherries ripening on the tree that I haven’t picked yet. 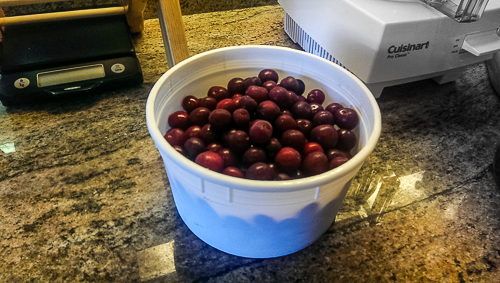 About half of those were harvested yesterday. Reader, I tell you: I got BORED picking cherries. Pick, pick, pick, for god’s sake why are there still more cherries to pick; I’ve been out here forever. They’re frozen because the tree is still shorter than I am, and even with its present abundance, we have to save up to get a useful amount. (They’re sour cherries, so less the kind of thing you just snack on than what we buy at the farmers’ market.) But we have enough to do . . . man, there are too many possibilities. My husband has been making jam out of various fruits, so maybe that. Or a pie? Is this enough for a pie? Maybe some little tarts or something? I don’t know.

I only know that it’s no longer the Charlie Brown Cherry Tree. Ladies and gentlemen, this is The Little Cherry Tree That Could.