Not to be confused with my own series! Brenda Cooper’s novel Wilders takes place in a world on the other side of an ecological collapse. Here’s what the cover copy has to say: 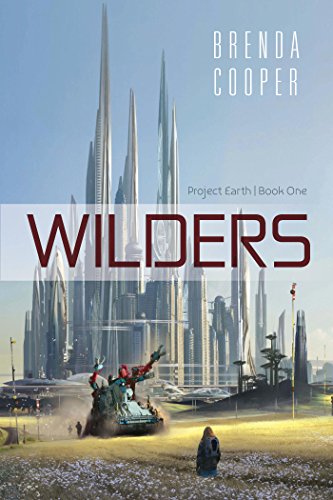 Coryn Williams grew up in the megacity of Seacouver, where every need is provided for—except satisfaction with life. After her parents’ suicides, her sister, Lou, fled the city to work on a rewilding crew, restoring lands once driven to the brink of ecological disaster to a more natural state. Finally of age, Coryn leaves the city with her companion robot to look for her sister.

But the outside world is not what she expects—it is rougher and more dangerous. While some people help her, some resent the city, and still others covet her most precious resource: her companion robot. As Coryn struggles toward Lou, she uncovers a group of people with a sinister agenda that may endanger Seacouver.

When Coryn does find her sister, Lou has secrets she won’t share. Can Coryn and Lou learn to trust each other in order to discover the truth hidden beneath the surface and save both Seacouver and the rewilded lands?

What was the spark that brought Coryn to life?

Wilders is the beginning of a new series for me. Although I’ve written a number of near-future stories set on Earth, Wilders is the first novel-length science fiction I’ve set on my home planet. Everything else has been set some indeterminate time in the future in a different solar system, in space, or once, in the far past. Setting things in brand new made-up worlds is easy. I love world-building.

But I wanted to write more directly about us. So I plunged in a book about two broad topics I care about: the environment and technology. Wilders is about a time fifty years in our future, with fabulous and powerful cities full of technology, entertainment, and safety. The land between cities has been ravaged by climate change. In order to explore the technology thread, I needed a naïve protagonist who readers wouldn’t fault for being way-too-dependent on her robot companion. Even though my viewpoint character, Coryn, would learn enough to be compelling through the story, I struggled to bring her to life early on. Some very bad things happen to her. These give her great pain, so she is sympathetic, but still, frankly, a little boring in the first few chapters. Coryn also doesn’t know enough at the beginning of the book to tell the story of the world to the reader in any detail.

So I needed help, but I didn’t know what kind.

Coryn is a runner. This is how she dumps her pain, and her loneliness. Running. Her robot, Paula, is her only friend. Paula trains her, and together they run through the city, deeply immersed in augmented reality worlds. Then one day a much older woman, Julianna, runs right past Coryn, and makes it look easy. Intrigued, Coryn follows her.

Now, I had never seen Julianna before. She wasn’t in my rough outline. She wasn’t on my list of characters. I didn’t know who she was or what she looked like other than the gray ponytail from the back. But Julianna’s existence opened entire avenues of exploration into the hidden secrets of my future city, and she became a main character in Wilders and in the sequel (tentatively named Keepers). Her backstory is the backstory of the city, her wealth is the key to resources I need later, and her deep distrust of robotic companions makes Coryn question her own blind trust of Paula. In fact, the first moment this happens is on the first run, where Julianna make Coryn leave Paula outside of the restaurant with her own security robots. Here is when that happens:

At the landing, the still-nameless woman leaned over to her. “Leave your companion outside.”

That surprised Coryn. “She usually sits with me.”

A slightly perturbed look crossed the woman’s face. “Well, I’m going to eat with you. She doesn’t need food. She can stay out with my guards.”

Coryn blinked. Paula’s job was to keep her safe.

So that’s the spark that helped bring Wilders to life. Its name is Julianna. She sprang to existence exactly when I needed her.

Brenda Cooper is the winner of the 2007 and 2016 Endeavor Awards for “a distinguished science fiction or fantasy book written by a Pacific Northwest author or authors.” Her work has also been nominated for the Phillip K. Dick and Canopus awards.
Brenda lives in Woodinville, Washington with her family and three dogs. A technology professional, Brenda is the Chief Information Officer for the City of Kirkland, which is a Seattle suburb.
Brenda was educated at California State University, Fullerton, where she earned a BA in Management Information Systems. She is also pursuing an MFA at StoneCoast, a program of the University of Southern Maine. Learn more or sign up for her newsletter at her website: http://www.brenda-cooper.com.