If you’re like me, the phrase “Orpheus myth in space” gets your immediate attention. Here’s Jessica Reisman to tell us about the spark that brought Substrate Phantoms to life! 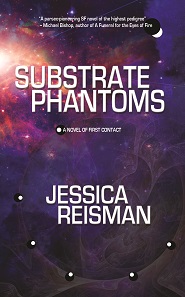 Substrate Phantoms had a long road to publication, so I’ve had to cast my mind back to remember the original writing and when the fire seemed to catch. I already had my far future science fiction universe, the Aggregate, in which I’ve had several stories and my first novel (so long ago now that Substrate gets to be a new debut), and had been playing around with the idea of the Orpheus myth in space, a kind of ‘don’t look back’ when a character is fleeing a space station, trying to save a loved one.

That was all very well, but things weren’t really taking any compelling shape. It was with the haunting of the space station that the first sign of heat flared up. A kind of film reel unfurled in my mind, of powerful images and feelings having to do with the intersection of technology and futurity with superstition and our need for the kind of possibility inherent in the more inward, arcane, and irrational side of our natures. Where these elements—often set in opposition—cross is a deep vein of story for me.

It was a pretty potent unfurling of image and feeling, that film reel. It had what felt like the whole story—and more—within it. My writing process is what we sometimes call “organic.” The initial phase of image, feeling, and story arc is like a seed for me, a tiny, dense ball of potential in which the story exists. To maul the metaphor, note-making, research, background work, and world building are all preparing the ground, planting, and fertilizing; the actual searching march of words onto page is when the growth begins and the story stretches toward its shape.

So there was the spark of the haunted space station—a usefully compelling elevator pitch, but what now? I think it leapt into full conflagration when I found the opening of the first chapter:

Revelation deck rested currently in station shadow, spangled in reflections off the solar collectors. Long glimmers cut through the high dim space in a slow dance. Revelation deck was a big space with open gridwork, gridwork being the bones of station superstructure hidden on other decks. Tall viewports and a lack of adult traffic made it a favorite haunt of station kids, four of whom sat clustered under a twenty-foot span of the grid arch. Likely there was someplace they were supposed to be, and strict regulations said they shouldn’t be there, but it was a regulation never enforced.

Jhinsei, two-thirds of the way through sitting a shift at the automated shuttle monitors, liked the murmur of voices. He had been such a kid himself, not too many years past, listening to tales on Revelation; besides, they lessened the loneliness of the cavernous deck.

Revelation deck, far future space station, kids telling stories, future and past: it makes friction for me and, voila, sparks!

The space station Termagenti—hub of commerce, culture, and civilization—may be haunted. Dangerous power surges, inexplicable energy manifestations, and strange accidents plague the station. Even after generations of exploring deep space, humanity has yet to encounter another race, and yet, some believe that what is troubling the station may be an alien life form.

Jhinsei and his operations team crawl throughout the station, one of many close-knit working groups that keep Termagenti operational. After an unexplained and deadly mishap takes his team from him, Jhinsei finds himself—for lack of a better word—haunted by his dead teammates. In fact, they may not be alone in taking up residence in his brain. He may have picked up a ghost—an alien intelligence that is using him to flee its dying ship. As Jhinsei struggles to understand what is happening to his sanity, inquisitive and dangerous members of the station’s managing oligarchy begin to take an increasingly focused interest in him.

Haunted by his past and the increasing urgent presence of another within his mind, Jhinsei flees the station for the nearby planet Ash, where he undertakes an exploration that will redefine friend, foe, self, and other. With Substrate Phantoms, Jessica Reisman offers an evocative and thought-provoking story of first contact, where who we are is questioned as much as who they might be.

Jessica Reisman’s stories have appeared in numerous magazines and anthologies. A three-time Michener Fellow, she has been writing her own brand of literary science fiction and fantasy for many years. Jessica has lived in Philadelphia, parts of Florida, California, and Maine, and been employed as a house painter, blueberry raker, art house film projectionist, glass artist’s assistant, English tutor, teaching assistant, and editor, among other things. She dropped out of high school and now has a master’s degree. She makes her home in Austin, Texas, where well-groomed cats, family, and good friends grace her life with their company. Find out more at her site.