Spark of Life is a chance for authors to talk about a key moment when the story came to life: a character did something unexpected, the world acquired new depth, or the plot took a perfect but unforeseen turn. For more details, go here.

Juliet McKenna, The Shadow Histories of the River Kingdoms

This Must Be Kept A Secret

After four series and fifteen novels, I’m familiar with that electrifying moment when a story comes alive, when the interaction of people, places and plot generates an internal momentum to drive the narrative, often in unexpected directions. It can be a wild ride. It’s always exhilarating.

My experience with the stories in The Shadow Histories of the River Kingdom was very different. This new fantasy world started with one short story for an anthology called “Imaginary Friends”. What if a lonely child’s imaginary companion proved to be a threat? not a consolation? What would make this significant? It would be, if that child was important. So I devised the tale of Princess Kemeti discovering that her imaginary friend can step out of the Unreal World. Worse, he threatens to break free of her control. That’s some challenge for a nine year old.

So far, so good, for a single story. Then I realised something about the magical environment I’d just created, where dreams, longing and other emotions can call something or someone into existence in a parallel world. The possibilities were limitless, and if those creations could cross over into day-to- day reality, so was the potential for confusion and for dangerous situations. More stories floated through my own imagination. But that wasn’t the ‘spark of life’ moment.

That came when I realised this magic would have to be kept a secret. Except, how could that possibly be done? If someone’s dreams of a unicorn could send one trotting down a street? Unicorns get noticed. Apparently inexplicable things get noticed by the authorities, religious, political, whoever. Once those in power worked out what was happening, they’d see that same limitless potential for chaos that I had. Then they would go one step further. They’d realise the uses they could make of such magic, as well as the ways their enemies could abuse it. What would this mean for the River Kingdom which I’d sketched into the background of Kemeti’s story?

More than that, something so powerful would have to be kept a secret. But how do you keep something so unpredictable hidden? By watching and waiting and concealing every manifestation as quickly as possible. By assessing anyone and everyone who proves to have this uncanny magical talent. By enlisting those powerful enough to be of use, whatever their character or their background might be. When the stakes are so high, that’s going to be an offer these people would be very unwise to refuse. But that’s okay if we’re the good guys, right? The ends can justify the means…

That’s it. That’s the spark. This tension, this challenge, the inherent instability, which will drive more stories, novellas and novels set in this world. 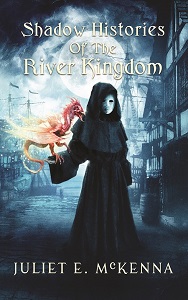 Juliet E McKenna is a British fantasy author living in the Cotswolds, UK. Loving history, myth and other worlds since she first learned to read, she has written fifteen epic fantasy novels, from The Thief’s Gamble which began The Tales of Einarinn in 1999, to Defiant Peaks concluding The Hadrumal Crisis trilogy. In between novels, she writes diverse shorter fiction, ranging from stories for themed anthologies such as Alien Artifacts and Fight Like A Girl through to forays in dark fantasy and steampunk with Challoner, Murray and Balfour: Monster Hunters at Law.

Currently exploring new opportunities in digital publishing, she’s re-issued her backlist as ebooks in association with Wizard’s Tower Press as well as bringing out original fiction. Most recently, Shadow Histories of the River Kingdom offers readers a wholly new and different fantasy world to explore. Learn more about all of this at www.julietemckenna.com and find her on Twitter @JulietEMcKenna

2 Responses to “Spark of Life: Juliet McKenna on THE SHADOW HISTORIES OF THE RIVER KINGDOMS”