Aliette de Bodard’s latest book, The House of Binding Thorns, is the second book in the Dominion of the Fallen series, which began with The House of Shattered Wings. What’s the point at which the book came to life for her? 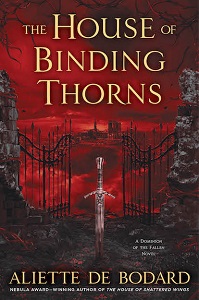 I really dithered about where to start The House of Binding Thorns.

The book is a Gothic dark fantasy set in a decadent Paris set in the wake of a magical war: I knew pretty early on that it was going to be "opium war with dragons" and that it was going to involve politics, backstabbing and magical intrigues around an arranged marriage, but while I hammered out the basics of the plot pretty quickly, I couldn't get the entire thing to gel. It sounded fantastic on paper, but I tried and discarded several beginnings that didn't work.

One of the main characters, Madeleine, is a drug addict (to the opium analogue in this universe, a drug distilled from the ground bones of Fallen angels). I knew that her first chapter was going to involve her being forcibly weaned off the drug in unpleasant ways (since the magical faction she belongs to, House Hawthorn, is headed by a sadist and completely ruthless). But every attempt I made at opening in media res fell flat.

And then I realised I was having a twofold problem: the first was that opening on a character being tortured felt too over the top for me personally. The second was that opening in media res is a very tricky thing. It's too early for the reader to care about the characters that horrible things are happening to, so the writer needs to both get the reader to care and to keep everything else going at the same time, which is a lot of very hard juggling.

The usual fix to this is to open earlier, get the reader time to get attached to the characters, and then have things go pear-shaped. I realised that I could actually open later, after the weaning from the drug had already happened, and only allude to it in flashbacks. This solved both of my problems in one go. I could make the reader attached to a character recovering from trauma, and I also could leave the description of said trauma mostly to the reader's imagination– which I've always found to be more effective than graphic descriptions of violence.

I sat down, and wrote:

In the House of Hawthorn, all the days blurred and merged into one another, like teardrops sliding down a pane of glass. Madeleine couldn’t tell when she’d last slept, when she’d last eaten—though everything tasted of ashes and grit, as if the debris from the streets had been mixed with the fine food served on porcelain plates—couldn’t tell when she had last woken, tossing and turning and screaming, reaching for a safety that wasn’t there anymore.

And just like that, the character (and the book) came alive for me. 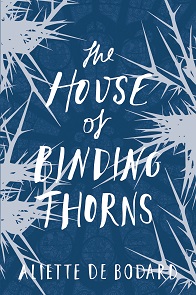 Aliette de Bodard writes speculative fiction: her short stories have garnered her two Nebula Awards, a Locus Award and two British Science Fiction Association Awards. She is the author of the Dominion of the Fallen series, set in a turn-of-the-century Paris devastated by a magical war, which comprises The House of Shattered Wings (2015 British Science Fiction Association Award, Locus Award finalist), and its standalone sequel The House of Binding Thorns (Ace, Gollancz). She lives in Paris. Visit her website or Twitter for more information.