A while back the artist Robin Scott, a friend of mine, released a project called The Urban Tarot.

I want to talk about how awesome this deck is — and I especially want to address those of you for whom the “tarot” part isn’t much of an attraction, but the “urban” part might be. Let’s start by quoting from Robin’s introduction in the guidebook:

Too often we are told that magic and wisdom belong only to the forgotten forests, the places untouched by human hands, and to ages long lost to memory.

I reject this idea. I look around my world, and I see the beauty, the wonder, the magic in the metropolis, the power under the pavement.

“The metropolis” there isn’t generic. It’s New York City, where Robin lives — and that’s exactly what draws me to the Urban Tarot. I’ve been meaning to make a post about the way urban fantasy has the potential to inscribe the landscape around you with an additional layer of meaning: it’s something I tried to do in the Changeling game I ran, and it showed up in the Onyx Court books, too, which were inspired by that game. The urban fantasy novels I like often do this kind of thing, not just taking place in Generica City or the Hollywood version of San Francisco or wherever, but making use of place on a more detailed, meaningful level. It isn’t just an urban fantasy thing — it isn’t even a new thing; Keith Basso’s Wisdom Sits in Places talks about the link between Western Apache folklore and the landscape around their communities — but it works especially well there because the world the story describes is ours, or at least closely adjacent enough to ours that we can feel the resonance.

The Urban Tarot does this beautifully. It ties the cards in with the landscape and the people and events of New York City — the public library, Coney Island, the Brooklyn Bridge during Hurricane Sandy — and it pushes back against the idea that cities aren’t magic, that the kind of meaning we read into the world around us back when that world was rural can’t be retained in the modern day. It rethinks the old archetypes of the tarot into a context you and I can recognize: the Empress is feeding a baby in a high chair, the Eight of Wands shows a cyclist delivering a pizza, the Prince of Swords is a hacker. Even if you don’t have any interest in the tarot as such, you could do worse than to feed your urban fantasy brain with these cards and their associated writeups. 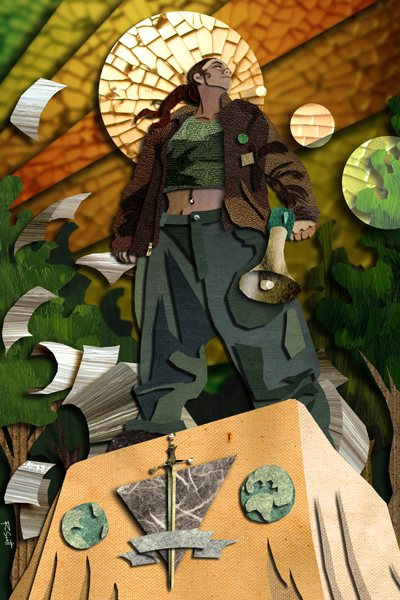 And the artwork is, in my opinion, gorgeous. Each card is built out of a kind of textural collage, abstracting the image without losing its recognizable form. I have the Princess of Swords (aka The Activist) on my wall. I liked the art enough that when I backed the Kickstarter, I chose to go for the level where I could model for one of the cards — no, I’m not telling you which; you’ll have to find out for yourself. 😉 Robin and I struck a deal wherein I wrote a piece of flash fiction for the guidebook, riffing off a location in the city she wasn’t able to work into the deck; that’s how much I wanted to support this project.

You can buy the Urban Tarot itself, or prints of any of the cards. I strongly encourage you all to at least go take a look, and appreciate what Robin has put together.