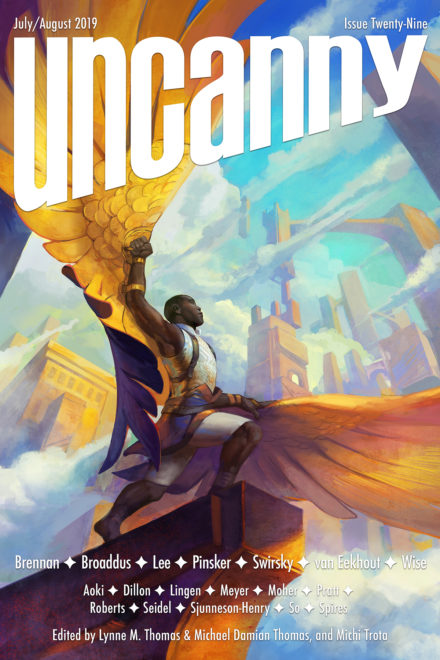 “On the Impurity of Dragon-kind”

Before I begin, I feel that I should mention the people who made it possible for me to stand before you now. Unfortunately neither my mother nor my father can be here with me today, but my Uncle Matthew and Aunt Bess are, and I thank them both for all their hard work. For most of my life I’ve been, as they put it, “a little heathen” . . .

In a way, Tumblr deserves credit for the existence of this story. You see, my husband sent me a link to this conversation, which can basically be summed up as “dragons + Judaism = wonderfully nerdy fun.”

. . . and then I thought, Lady Trent is Jewish. (Or rather Segulist, but it’s based on Judaism.) So are most of the people in her world’s equivalent of Europe.

They would totally have these kinds of arguments.

Credit for helping me turn “dragons + Judaism” into a story instead of merely an amusing idea goes to Noah Beit-Aharon, who helped me work through where the interesting points of intersection would be, and then how to approach that in a narrative fashion. For those who aren’t familiar with Jewish practice, this story is written in the form of a drash or dvar Torah, a sermon examining a passage from scripture and the various commentaries or interpretations of it. Furthermore, this one is being delivered by Lady Trent’s son Jake, as part of his (belated) bar mitzvah.

It was published in issue #29 of Uncanny Magazine, July/August 2019.

There is something rather satisfying about reading a story that is essentially a very polite middle finger to a bunch of adults trying to pressure a young man into hating his mother […] it’s a fun and charming piece, full of personality and a bit of mischief. A delightful read!

Clever and especially noteworthy for fans of Brennan’s Lady Trent.

—Adri Joy, Nerds of a Feather